Social media is a wonderful way to connect with family and friends. But it’s also a place where it’s easy to throw out topics you wouldn’t dare bring up at Thankgiving dinner or in mixed company…not as in male-female, but in the political polar opposites so many of us find ourselves. Differing views, honest debate and discussion, are enlightening…But the climate of nastiness is too much.

I’ve gotten good at biting my tongue (it’s a wonder I still have a tongue!) but I find sometimes I just need to get the junk out of my head. So…I write. Tonight’s poem is one of those rants. My heart grieves over what we are becoming.

Woe to all the frenzied faithless
Wide-eyed, gulping baseless lies
Called to act in fear and hatred
Marching to faux battle cries.

Woe to all the masses blinded
Trusting in only what they’re fed
By charlatans, as they’re reminded
All Hope is gone, their God is dead.

Woe to all the haughty righteous
Building walls to hide their children
Claiming charity, their soulless
Lives beholden to greedy men.

Woe to hippocrates and fools
Who seek their heaven here on earth
Excluding outcasts, changing rules
Ensuring that their rights come first.

Woe to the people who’ve lost their way
Who’ve fallen to idolatry
The truth is just a breath away
For ears to hear and eyes to see.

A close up view of White Clover. It is hard to believe that this is a common weed!

The theme for today is surprise!

It is day 30. The final day of poetry month and my challenge to myself to do a new poem and form each day. And surprise! I did it!

For the record, this month I explored the following poetry forms: Alouette, Free Form, Lune, Cleave, Shadorma, Palindrome, Ottava Rima, Triolet, Cascade, Fibonacci, Lai, Imayo, Sijo, Luc Bat, Epulaeryu, Terzanelle, Tetractys, HexSonetta, Sedoka (a Katouta x2), Minute, Tanka, Etheree, Than-Bauk, Bref Double, Alliterisen, Haiku, Limerick, Reverse (not to be confused with my own quirky creation, the ReVerse…more on this later…), and finally a revisit of the Cleave…I had forgotten I already did this form and it is, after all, one of my favorite forms! Of course there are so many other forms…classical as well as new forms being created to this day. This brings me to my ReVerses which have nothing in common with the Reverse poetry form.

As is my weekly practice, I like to look back, lifting a line from each poem of the previous week to create a ReVerse of my words. it is something I started doing years ago when I first started to write. I always have a favorite line in each poem and thought it would be fun to create a new poem using those favorite lines. I have not found a form that does this in all my research, though there is the Cento, which is a collection of lines from the poems of several authors – not a writer’s own work.

Inspired by the many classical and experimental new forms, I am left with only one solution. To create my own new poetry form!

And so I give you the Shi Sai (pronounced SH-ī with a heavy inflection on the Sh and a silent second s). It is Japanese for “re verse” or “re poem”. I used a Japanese translation because many of the earliest forms of poetry originated in Asia. And it has a nice ring to it, don’t you think? To make it official:

The Shi Sai, a form created by Kat Myrman in April 2016, is a poem created by taking one line of verse from several poems of an author’s own collection. The shi sai is done as a review of a series or collection of poems and therefore, each line should flow in chronological order of the dates the poems were written (from oldest to new). The lines chosen should be the author’s favorite from each poem. This form works best if the author resists the temptation to read the full new poem before all the verses have been added. (It helps one to resist the impulse to change a line to make it “fit”)

And so, I give you my shi sai then, on this last day of April. A look back at an amazing month that has one last story to tell!

something’s amiss with your mind
a dizzy streak of laser precision
it won’t be a secret
time to weep, to let things go suspended in cerulean blue
new life on the wing
moments of clarity
they say in time the truth will be revealed,
like moth to flame is drawn into the light
off to do our business then
it follows strict rhyme
minds, spinning in sound bites,
my garden thrives in a compost
releasing is an art, you know
drunken noodles sweating
I remember you in spring
extremes of longing, that bend on a breeze
our secret morning trysts
promise in a glass half full
bestowing grace
between cool silken bedsheets
heavy droplets descend
waning runs red
souls revealed line by beautiful line
waxing poetic perfection in words
graced in amaranthine blush
then one day she fell down
you hardly speak anymore and
turn to ash aching for warmth

Day29! Oh my! I can hardly believe this month of poetry is soon ending. But oh, what a journey it has been! I have learned so much about poetry and form, syllables and rhyme.

Today’s form is a Threefer! Not one, not two even, but three poems wrapped neatly in one! I give you the Cleave Poem. This is an interesting form. There is no rhyme or syllable count to bother with. It can be long or short. The best way to describe it is to explain how one reads a cleave poem. Each line spans two columns. Column A is poem #1. Column B (which can be separated by a line or by the use of italic or bold formatting) is poem #2. And wait, you’re not finished yet! One more read across the entire line completes the trio with poem #3.

It can be a bit tricky to write. When choosing a topic, or two as it were, it works well if you choose opposite ideas or images. I have found that writing completely across for two or three lines helps get the ball rolling. Then you can finish one column, and then the other, tweaking it as you go, so it makes sense every which way!

I’m having a bit of fun with this. Can you tell? This form is one of my favorites! 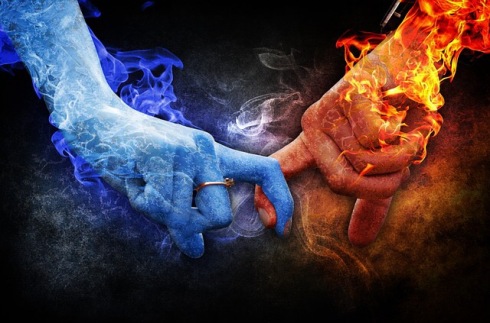 Friday’s Word of the Day Haiku 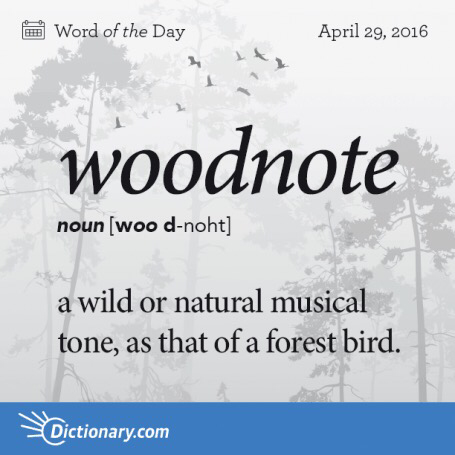 Happy Friday! What a lovely, lyrical word we have today…”Woodnote!” When I first saw the word this morning, I imagined that it must have had its origin in the mind of some 17th Century poet who penned it on parchment giving it life!

Dictionary.com simply mentioned that it came into use around 1632. And of course that was my cue to dig a little deeper. No other dictionary expounded further on the issue but I was determined to find the poet who first wrote it … I was certain it was a poet…a poet knows these things…😉

How do I love the Internet…oh let me count the ways…not the least of which, it brings the world to one’s computer screen! After a bit of search engine tweaking, I found my bard!!! Oh yes, my hunch was correct. And what was even more spectacular? The man who coined the word woodnote in 1631 (later published in 1645) used it to describe THE quintessential Bard, Shakespeare. Mystery solved!

Who is the poet? He is John Milton who, in “L’Allegro,” refers to Shakespeare as “Fancy’s child” who warbles “his native woodnotes wild.” You can read the entire poem HERE.

From the Encyclopedia Britannica…

L’Allegro, early lyric poem by John Milton, written in 1631 and published in his Poems (1645). It was written in rhymed octosyllabics. A contrasting companion piece to his “Il Penseroso,” “L’Allegro” invokes the goddess Mirth, with whom the poet wants to live, first in pastoral simplicity and then amid the “busy hum of men” in cities full of vitality.

And so, my challenge today is to pen a simple haiku using woodnote as my prompt. I do so hoping to channel a wee bit of Milton who gave us this wonderful word. Oh, if only. But knowing its origin makes my task so much sweeter!

This Haiku is in response to TJ’s Household Haiku Challenge prompt: “Jewel Box”. to read other haiku click HERE.