good intention paved,
it is where the rubber meets,
cans to kick, trails to blaze
‘midst primroses sweet
middling to high, hot hell to beat

And so we come to end of this month of Horatiodets. I really like this new form. It’s a keeper. Tomorrow begins another fabulous short form poetry style. Can’t wait to give it a spin!

devil in my shoe
making me stumble again
irritating, minuscule,
heart of a mountain,
unassuming fleck, chiseled by rain 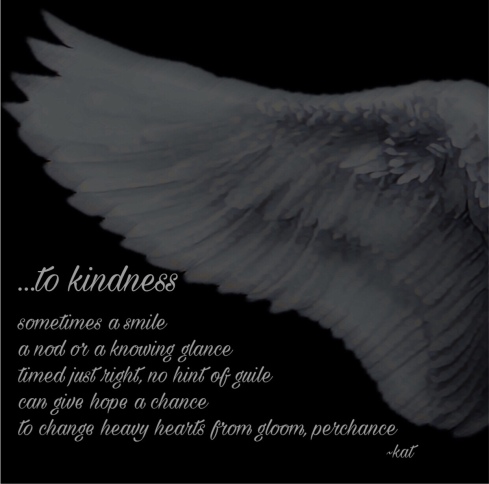 sometimes a smile
a nod or a knowing glance
timed just right, no hint of guile
can give hope a chance
to change heavy hearts from gloom, perchance

About the challenge: Each Tuesday I will provide a photo prompt. Your mission, if you choose to accept the challenge, is to tell a story in 280 characters or less. When you write your tale, be sure to let me know in the comments with a link to your tale. If you would prefer to post your tale in the comments (some people have very specific blog themes but still want to participate), I am happy to post a link to your site when I post your tale in the Round Up.

By Deepa at Sync With Deep:
Struggle
he had travelled
the seven seas
and
the seven continents…
yet
he struggles
to find his way
strange is his name
-Mr Wind…

By Willow at WillowDot21:
Lost
All morning wandering around the city. They’d seen many places of interest. None in the right place though! Stopping to discuss where to have their picnic. Dave made a discovery. ‘Bob’ he scolded ‘you’re using that map upsidedown.’ Karen muttered ‘should of gone to Specsavers.’
(Characters 279)

By Nova at My Namaste 365:
Typical Tourists
“The Trade Center Towers memorial is 350 kilometers past that bus stop, mate!” Geraghty emphasizes.
“Oh poppycock! That isn’t even a bus stop,” Omar followed,” It’s a trash can. Put your glasses on.” Geraghty chuckled a bit, while searching for his bifocals.
“Ah, lad, you’re right. I see now that it is a stop sign.” Geraghty commented. “Yesh!” Omar whispered. “Franz, the Tomb of the Unknown Soldier is there, to the left of The Washington Monument.”
The problem that kept repeating; however, is that drivers were on the left side of the street.
546 Characters – Nova mentioned that she was having trouble with the 280 characters on her blog. Keep trying Nova. You’ll get it. 😉

By Kristian at Tales from the Mind of Kristian:
Helpful Directions
“Excuse me, we’re lost. Can you tell us where we can find a hotel?”
“Sure, Buddy, straight down there, turn right at the garden centre. It’s number 11. The best hotel in town.”
When they arrived a sign by the door said: “Welcome to the House of Desire”.
“Looks nice,” Keith said.
[276 Characters]

By Fandango at This, That, and the Other:
Damn Tourists
I hate them. The tourists. Always stopping me on the street, asking me how to get to here or there. Do I look like a freakin’ tour guide? Haven’t they ever heard of Google Maps? Type in the name of where you want to go and it shows you a detailed map directing you there. Sheesh!
(279 characters)

By Teresa at The Haunted Wordsmith:
A New Day
First day jitters got to everyone that morning. It was understandable after what had happened, and they were happy just to have won the lottery – millions did not. George and Jen headed out with map in hand to find the coffee shop. They were happy when two campus guides helped.
278 Characters

By Reena at ReInventions:
Born Without
You were born without a sense of direction. And I am fool enough to plan these trips with you….
Trust me, I remember that we have to go left from here. We did that last time.
<Sigh> Last time was when you were ten years old….
“Dad, we have Google maps,”  interjected a sane voice.

By The Dark Netizen:
Map
“Ron, I think we have to go that way.”
“I agree with you, Bud.”
“Guys, are you sure we are going the right way?”
“Yep.”
“Sure?”
“Positive. You ladies need not worry about a thing.”
“Oh boys, we are not worried about anything, other than reaching the Annual Cartographers Meet, on time.”
Character Count: 280

By Di at Pensitivity101:
Lost
‘OK everyone. We’re looking for 15 Piedmont,’ he said.
‘ We take a left, then the second left and next left’.
‘According to the map that will bring us back here you idiot’.
‘That’s right. It’s behind us.’
‘Very funny Joe’.
218 characters

By Regina at Help from Heaven:
Entertaining Angels
They saw the couple poring over the map. Margaret thought they should just keep walking and let someone else help them. But Jim went over and and asked if he could help. The couple were so thankful. Later, Jim said to his wife, “You never know if we just entertained angels.”
(275 characters)

By Kate at Everywhere and Nowhere:
it’s all fun and games…
‘It’s definitely down here!’
‘We’re never going to win at this rate.’
‘Darling I think the map was the wrong way up…that’s fine you two go ahead, why listen to me.’
‘If Jim ever says the words orienteering, competition and fun in the same sentence again remind me that I’m busy.’
Characters: 278

By Melanie at Sparks from a Combustible Mind:
Twittering (and no texting)
Rory * hated this.  If you stopped for directions, every idiot with a vocal cord would show up to ‘assist’ you. Rory looked at the map again. The bald guy, unasked, kept insisting they go down the road clearly marked “DEAD END”.  Rory should have followed his own instincts.
(characters: 274)

By Michael at Morpethroad:
They were sure they had the right address. They hadn’t visited Grandma in a few years.
Where her house used to be was a new shopping mall.
They argued until one remembered Grandma saying to meet her in front of the butchers.
The butchers was where her old house once stood.

By Anurag at Jagahdilmein:
Tourist Traps
“Eiffel Tower? Just take a left,” I told the couple, “and then the 2nd right.”
The couple thanked us eagerly and moved on.
“That’s one good deed done for the day,” said my wife.
“Yup,” I agreed, “Sparky is going to be real grateful when these rich bozos stumble right into his arms.”
280 characters.

By Deb at Twenty Four:
It had been a lovely evening, all the family had gathered to celebrate her hundredth birthday and she had felt both loved and honored but then it happened.
The great grandchildren decided it would be amusing to bring out the candid photos.
It wasn’t.
(248 characters)

By Sadje at Keep it Alive:
Lost
Are we lost?
Of course not, I am never lost. I always know where I am and where I am going.
Then I think we should ask someone for the way
But we aren’t lost, I just told you
Let me have a look at the map maybe I can figure it out
No it’s okay we are almost there.
Sigh!
Character count= 276

By Ron at Read 4 Fun:
Not In My Neighborhood
Found this map on the internet. Look at this; they are everywhere! I thought the government would give us notice a few days before they placed one of them in our neighborhood. According to this map, they are everywhere among us. It’s time to move again, but where? Hide the kids!
279 characters

By John at Broadsides:
“Look, you go down this block until you reach a little cross, then you choose which block to take next” “Blocks are so frustrating,” said his wife, “why can’t we just wander about like we used to?” “But they make it easy to navigate, you’ll never get lost or confused again” “Bloody stupid blocks” said his daughter.

By JP at The Wide-Eyed Wanderer:
Oblivious
People stood on the street outside the offices of Paranormal Investigations arguing over directions. Heedless of the sullen thrumming coming from the building’s interior, they chattered on. They didn’t even hear the shrieks as the ground split swallowing the entire city block.
character count 280

By The Indieshe:
“To cure us of our cyber megalomania, the crafty Grandpa set up a treasure trail in the old town with a holiday in Paris as the prize.
With our smartphones confiscated,we were given maps to find our way.We had no Google to find how to read the Map.
Grandpa won and is in Paris!”
(276 characters)

By Jo at A Creative PTSD Gal:
Lou’s on 66
‘Look, Bruce, if we go left here we’ll get right back on to Route 66.’
‘I see that Leo but if we want to eat at Lou’s we need to go straight.’
The two men argued about the Route 66 trip while their wives snickered.
‘Should we tell them Lou’s is around the corner?’
‘Yeah, and on 66?’
Character Count: 280

By Maranda at Maranda Russell:
Route 66
“Route 66? I remember that road.”
“Great, thanks for the reminiscing, but that doesn’t tell us how to get there.”
“That is a road you only find by following your heart, not a map.”
“Thanks Big Bird, but we aren’t exactly looking for Sesame Street!”
“Shame..I could get you there too.”

By Peter at Peter’s Pondering:
Anthony was not told where his transplanted arm had come from.
He would have loved to know so that he could thank the family of the donor.
He was happy with his new limb, but there were a couple of things that irked him.
The worst of these was the constant urge to give Nazi salutes!
(280 characters)

By Margo at That Little Voice:
Lost in Twittering Tales
“Go 30 meters, that way, turn left. Go 100 meters, around the circle, take the first exit to the right, drive that way for another block.”
“But the map says…”
“No, no, go that way, you can’t miss it, unless you miss the curve at the end of the cul-de-sac…”

I loved all the dialogue this week. Well done everyone! And welcome to our newcomers. I hope you’ll be back. I noticed a few of you picked up on the Route 66 decals on the tourists’ matching jackets. Great attention to detail. Thank you for joining the challenge last week. For this week, a familiar scene. Pillows. But there could be so many stories behind this unmade bed. Insomnia, rebellious teenagers, the heartbreak of chronic illness, a crime scene, love’s afterglow. Oh the tales these pillows could tell…if pillows could talk! Do tell. What are the pillows telling you! (in 280 characters or less of course). I’ll see you at the Roundup next week! Have fun!

The officer scratched his head, “I’m sorry ma’am, what’s the problem? This is your son’s room? Is he missing?”

“He’s 15. He’s always been such a neat boy. Then this! Something’s terribly wrong. Drugs maybe?”