It is a rainy Friday here on the US East coast. It’s a great day for staying inside with a cup of tea and reading the dictionary. HAHA! I kid!

I will likely never use today’s Dictionary.com Word of the Day after I wrangle it into a haiku for you. It’s not one of those words that roll off the tongue. And to be honest, I don’t spend a lot of time discussing tortoises or things that pertain to or resemble them. Testudinal entered the English language in the 1800’s. It gets its origin from the Latin word, testūdō for “tortoise”. There’s not alot of info online about the word. No witty anecdotes or fascinating history to share. It’s just a word that I didn’t know before today and now that I do will likely forget tomorrow.

That being said, I do love the little critters. We inherited a Russian tortoise from a family member several years ago. We call him Flash. You can laugh…we meant it to be funny because of course tortoises are not considered the fastest of creatures. Though I will tell you, if he has a mind to, Flash can move quite quickly!

Now you may know that I have a few dogs…and a few cats…and a tropical bird…and now you know I have a tortoise too. Yes, I live in a zoo. It’s a character flaw actually. I am a sucker for critters with no place to go and I can’t say no.  And I can’t resist snuggling with all my adoptees…even Flash.

Don’t let anyone tell you that a cold reptile does not have the capacity to be warm and fuzzy. I am here to tell you that Flash is one of the best snugglers I know. He goes for the crook in my neck and blows in my ear before falling asleep.

Here are a few photos of me and Flash…followed by my haiku inspired by the Tale of the Tortoise and the Hare.

Have a great weekend! 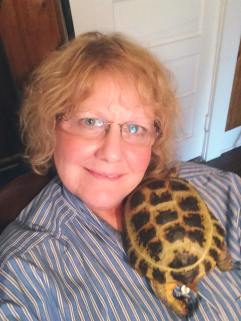 A tortoise will win
at a testudinal pace
never count him out.

A poem (comprised of 5 10-syllable lines with end words on each line that rhyme) for Jane Dougherty’s Poetry Challenge #50 based on the painting you see here. It just so happens that there is buzz in the news this week that NASA has discovered a new constellation. Well not a new one, it’s been there for eons, but their revelation has caused them to suggest that there are 13 zodiac signs not 12. This is terribly confusing and I am afraid I cannot wrap my brain around the new “me”.  Here’s my nifty little poem about stargazing.

I’ve always known that I’m a Gemini,
guided by twin stars in the night sky.
Its signs and attributes to me apply,
but scientific theory now implies
I’m Taurus born! That’s Bull I just can’t buy!

“What Freedom!” a painting by Ilya Repin

Only seconds passed, but it seemed like an eternity. The thunder rumbled to a soft hum until only the ticking from a clock in the parlor filled the silence.

“Yes sir. Startled is all. I’ll get some candles from the kitchen.”

“I’m afraid that’s going to have to wait Hannah. We have a problem.”

Hannah looked up. Henry’s face and the wall behind him glowed red; his eyes were wide with horror. Hannah spun around to see the trees in the front yard consumed by a raging fire.

“Hannah, I need you to call the Fire House, then meet me outside with every bed quilt you can carry.”

Hannah rushed to the phone, picked up the receiver and gave the handle a crank. “I’m not getting the operator!” she yelled to Henry as he headed toward the front door.

He paused in the doorway, turning to look at her, “Try once more Hannah. If you still can’t get anyone, just meet me out front with the blankets.”

“Alright.” Hannah gave the phone another crank. Nothing. She glanced outside and saw Henry beating back the flames with his overcoat. Hannah rushed down the hallway grabbing two quilts, and was headed for a third when she heard Henry scream her name.

She tossed the quilts on her shoulders and ran to the front yard. “I’m here Henry. What should I do?”

“Take a quilt and beat any fire you see on the ground until it’s out Hannah! That’s our only hope if we are going to keep it from overtaking the house!”

By now the Gordons, had joined the effort. Mr. Gordon had buckets for water and Margery brought a broom to beat the flames into submission. In all, three old trees were engulfed. The tops of the trees were out of reach so everyone focused on the sparks and flaming branches that fell to the ground. It was dangerous and frightening. Their eyes and noses burned from the smoke. Occasionally a spark would land on their clothing leaving a singed hole as it dissolved to ash. After thirty minutes the fire brigade pulled up to the curb.

“We heard from the neighbors that lightening hit your trees Henry. We’re here to help.” In no time they pumped enough water to the tops of the trees to douse the flames.

While the fire crew packed their gear, Henry and Hannah stood with the Gordons in front of the house. Hannah didn’t even care that she was sopping wet and smudged with soot, though it was not how she had envisioned meeting the neighbors for the first time.

“Thank God you were here.” Henry gushed, “I don’t know what we would have done without your help.” He noticed Margery Gordon smiling at Hannah. “Forgive me, I don’t believe you have met Hannah. She is my new housekeeper.”

“Oh, I’ve heard all about you my dear,” Margery clucked, “Helen had nothing but wonderful things to say about you and your family. We must do tea some afternoon so you can tell me all about the Waverly Estate. Such a grand place it is. I’ve admired it since I was girl.”

“I look forward to that Mrs. Gordon.”

“Margery, you call me Margery, Hannah. I just know you and I are going to be fast friends.”

“Now, now Margery, let’s be getting home. I’m sure these folks are tired out from all this excitement. I know I am,” interrupted Margery’s husband, Joseph. He knew once she started talking, it would be impossible to get her to leave.

“Yes dear, of course you’re right,” she said, “we’ll have plenty of time to catch up, won’t we Hannah! Have a lovely evening, what is left of it, you two. Hannah, I will see you soon!”

The Gordons shuffled toward their house leaving Henry and Hannah alone in the front yard.

“Well, now you’ve met the neighbors,” Henry smiled, brushing a leaf from Hannah’s hair. His eyes met hers and his face softened.

Hannah couldn’t look away. What was she feeling? Who was this Henry? Hannah was swept up in a whirlwind of emotions when Henry stepped closer leaning toward her ear.

“So…Miss…Hannah is it?” he grinned, “Tell me, where were we when lightning struck.”

This is the twelfth installment in a continuing series that is inspired by Jane Dougherty’s Weekly Microfiction Challenge prompts. I was inspired by this week’s painting, an exhilarating piece by Ilya Repin, more from the emotions that it evokes rather than a literal illustration for the story. If you would like to read the previous chapters, click HERE and scroll down to the story called Seasoning.

There is strength to leave
to pursue one’s wildest dreams
when home’s your anchor.