why do I have eyes of blue and curly golden locks
what mystery meld of genes informs my flesh and blood
am I just the sum of kin who’ve lived and died before
wondering what makes me, me, and makes you, you
our histories’ hold a glimpse, hard to ignore

From a history source online:
Queens of Italy: Women in Power in Medieval Italy

Theodelinda was born in 570 A.D. in Bavaria. Her parents were Garipaldo, of Frank origin, and Valderada, daughter of a famous Lombard King, Vacone. At the age of nineteen, she became the wife of Autari, king of the Lombards, bringing him royal blood from her Lombard ancestor and good relationship with the Bavarian Kingdom. But after just one year of marriage, Autari died. According to the legend, the widow was allowed to choose her next husband: Agilulf, who became king of the Lombards. More likely, she was “persuaded” to marry the chief chosen by the dukes. The royal couple resided in Milan, a former capital of the Roman Empire. They pursued a policy of pacification among Lombards and Romans, promoting the coexistence of Catholicism and Arianism, the religion of the majority of the barbarians. Theodelinda founded a church in Monza (a few kilometers from Milan), doting it with a rich treasure and vast possessions. Cleverly, she made the church follow the 3-chapters doctrine, a schismatic position that was somehow half-way between Catholicism and Arianism. At the death of Agilulf, in year 616, Theodelinda became regent for her son Adaloaldo. The policy of pacific coexistence, however, was opposed by the Lombard chiefs, who overturned Adaloaldo in year 626. He died a little later, followed by Theodelinda in year 627.

The treasure of Theodelinda is an extraordinary collection of objects that can be seen at the museum of the “Duomo di Monza”. Among the objects donated by Theodelinda herself to the church, there are a precious binding for a Gospel book, a religious crown, a cross encrusted with precious stones, a goblet that was used by the royal couple at the ceremony of their engagement and small ampullas that contained oil from Holy Land. Other objects came from the queen’s funerary set: among them, a splendid group in silver representing a hen with seven chicks. The treasure of Theodelinda includes the famous “iron crown”, believed to contain a nail from Christ’s cross. Despite of the lack of any real connection to the queen, this symbol of royalty, used by German emperors and also by Napoleon, still adds to her myth.

Theodelinda was an influential woman in a society dominated by males and perturbed by violence and war. Her vision of a reformed society took shape centuries after her death, in Italy of the middle ages. Through time, she became a symbol of royalty and religious piousness. Even after all these centuries, her charm still lingers in the vaulted domes of the Duomo of Monza, where the wonder of her treasure reminds us of the woman who is considered to be the first “queen of Italy”.

burst forth in salutations for these pious few of note
grace, humility, compassion stirred their hearts and
souls; some were royal born, some were royal wed,
a full life they all lived then to the nunnery they fled
sainted, miracles post-death, their legacies are legend

In my ancestry searches, I’ve come across several saints in my family tree. These are the women saints that I have discovered so far. It was not uncommon for women of royalty to take an interest in charitable work and building abbeys throughout Europe. Once their children were grown and their husbands gone (for they often outlived them) these ladies would “get thee to a nunnery”…or as the records show, they would retire to the abbeys they had built. Sainthood was always bestowed upon them posthumously, as witnesses began to report miracles associated with them. Above are the pictures of my great-greats who left such a legacy. 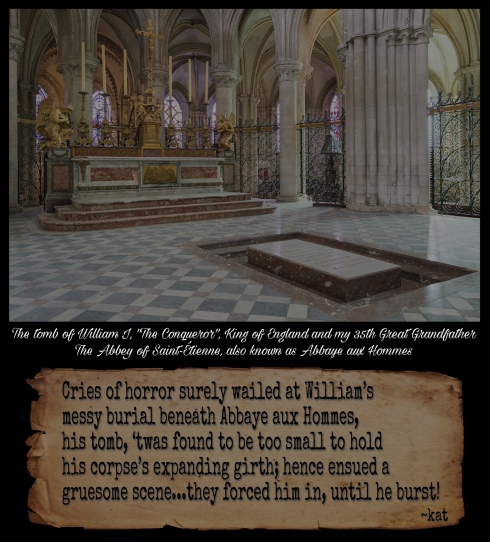 Cries of horror surely wailed at William’s
messy burial beneath Abbaye aux Hommes,
his tomb, ‘twas found to be too small to hold
his corpse’s expanding girth; hence ensued a
gruesome scene…they forced him in, until he burst!

When I was in school I had little use for history with its dry facts and dates to be memorized, only to be forgotten once I’d barely passed the final exam. But as I have discovered a personal link with some of these characters I’ve had the opportunity to dig past the textbooks. Today’s story is about my 34th Great Grandfather William, the Conqueror, the Bastard King. He had a turbulent reign as king. Married Matilda of Flinders and  had at least 9 children, among them Henry, my 33rd great. But the story I found most interesting was his funeral. You don’t generally read this sort of thing in history books. Thanks to the internet and Wikipedia read on to learn the final chapter of William’s life:

“Disorder followed William’s death; everyone who had been at his deathbed left the body at Rouen and hurried off to attend to their own affairs. Eventually, the clergy of Rouen arranged to have the body sent to Caen, where William had desired to be buried in his foundation of the Abbaye-aux-Hommes. The funeral, attended by the bishops and abbots of Normandy as well as his son Henry, was disturbed by the assertion of a citizen of Caen who alleged that his family had been illegally despoiled of the land on which the church was built. After hurried consultations, the allegation was shown to be true, and the man was compensated. A further indignity occurred when the corpse was lowered into the tomb. The corpse was too large for the space, and when attendants forced the body into the tomb it burst, spreading a disgusting odour throughout the church.”

once upon a time lived a viking maiden fair,
princess, Kievan queen, woman scorned, a saint,
who settled scores, who buried men alive,
set flocks affire, razed a town, my dear great
grandma, Olga, was the baddest fox around 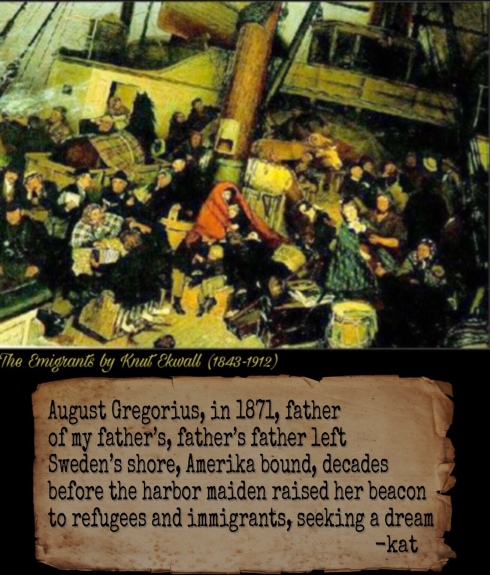 August Gregorius, in 1871, father
of my father’s, father’s father left
Sweden’s shore, Amerika bound, decades
before the harbor maiden raised her beacon
to refugees and immigrants, seeking a dream

August Stanza a Day Challenge: A short 3,4, or 5 line poem no syllable counts of rhymes, starting with the word ‘August’ on the first day. The last word of the poem will be the first word of day two’s poem, and so on until the end of the month.