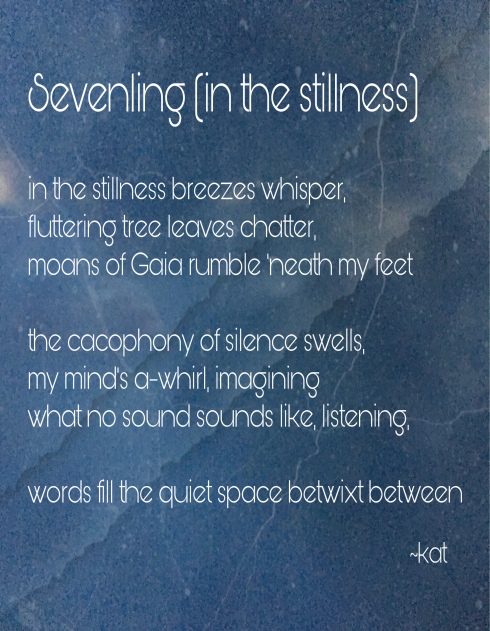 Sevenling (in the stillness)

the cacophony of silence swells,
my mind’s a-whirl, imagining
what no sound sounds like, listening,

I am challenging myself this month with a neat new form I found called the Sevenling. Believe me when I say this form is a challenge. There is no required rhyme or syllable constraint (it should however it flows well if you use an iambic cadence) but the tone and flavor of each tercet juxtaposed with the final summary line requires some thought. Below is the official definition:

The Sevenling is an invented form patterned after the poem He Did Love by 20th century, Ukrainian poet, Anna Akhmatova. The verse form was named and first described by Scottish poet Roddy Lumdsten as a teaching exercise. So who is the creator, Akhmatova or Lumdsten?The Sevenling is a heptastich that includes parallels and ends with a narrative summary line similar to the 3rd line of a haiku with a juxtaposed image. The tone should suggest a little mystery, a feeling that only part of the story is being shared. One source suggests the poem should be titled “Sevenling: (first few words of poem).

The elements of the Sevenling are:

1. a heptastich, a poem in 7 lines made up of 2 tercets followed by a single line. metered at the discretion of the poet.

3. composed with 3 complimentary images in the first tercet and 3 parallel images in the second tercet. The end line is a juxtaposed summary of the 2 parallels, a sort of “punchline”.

Like Loading...
This entry was posted on Saturday, June 1st, 2019 at 4:04 pm and tagged with Challenge, digital art., June, Poem a Day, Poetry, Sevenling and posted in Challenges and Writing Prompts, Digital Art & Photos, Poetry, Random Thoughts and Musings, Sevenling. You can follow any responses to this entry through the RSS 2.0 feed.
« May Day 31
Sunday’s Week in ReVerse – 2 June 2019 »