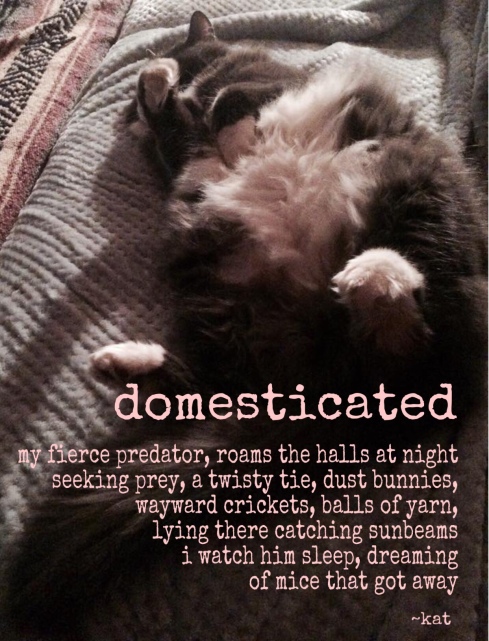 my fierce predator, roams the halls at night
seeking prey, a twisty tie, dust bunnies,
wayward crickets, balls of yarn,
lying there catching sunbeams
i watch him sleep, dreaming
of mice that got away

Kimo poems are an Israeli version of haiku. Apparently, there was a need for more syllables in Hebrew. That said, most of the rules are still familiar:
• 3 lines.
• No rhymes.
• 10 syllables in the first line, 7 in the second, and 6 in the third.
Also, the kimo is focused on a single frozen image (kind of like a snapshot). So it’s uncommon to have any movement happening in kimo poems.

Like Loading...
This entry was posted on Tuesday, April 23rd, 2019 at 9:00 pm and tagged with Challenge, digital art., digital photography, Kimo Poem, NaPoWriMo2019, Poem a Day, Poetry and posted in Challenges and Writing Prompts, Digital Art & Photos, Kimo, Poetry, Random Thoughts and Musings. You can follow any responses to this entry through the RSS 2.0 feed.
« Twittering Tales #133 – 23 April 2019
labyrinth – NaPoWriMo 2019 #24 »