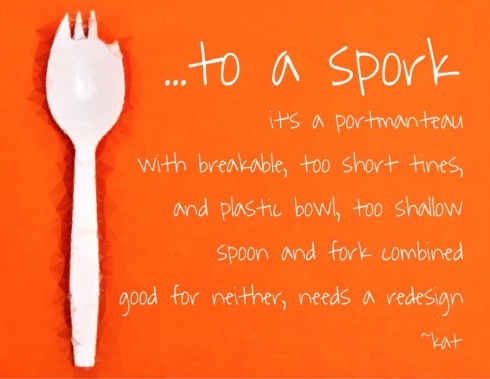 it’s a portmanteau
with breakable, too short tines,
and plastic bowl, too shallow
spoon and fork combined
good for neither, needs a redesign

Can you tell I’m not a fan of these clumsy hybrid utensils. I’d rather eat with my fingers than fight with one of these things! I should note that there have been a number of redesigns since it first came on the scene in the late 19th century. They all look rather odd, and equally useless. Though some have been given longer tines (apparently I’m not the only one bothered by that design flaw!) which does, I suppose improve the fork function. But…what’s wrong with toting a spoon and a fork if that’s what you need? It’s not like they take up a lot of space. Just a thought. 😉🤣

Like Loading...
This entry was posted on Monday, February 11th, 2019 at 2:05 pm and tagged with Challenge, digital art., February, Horatiodet, micropoetry, Poem a Day, Poetry, spork and posted in Challenges and Writing Prompts, Digital Art & Photos, Horatiodet, Poetry, Random Thoughts and Musings. You can follow any responses to this entry through the RSS 2.0 feed.
« hard road – Manic Mondays
Twittering Tales #123 – 12 February 2019 »