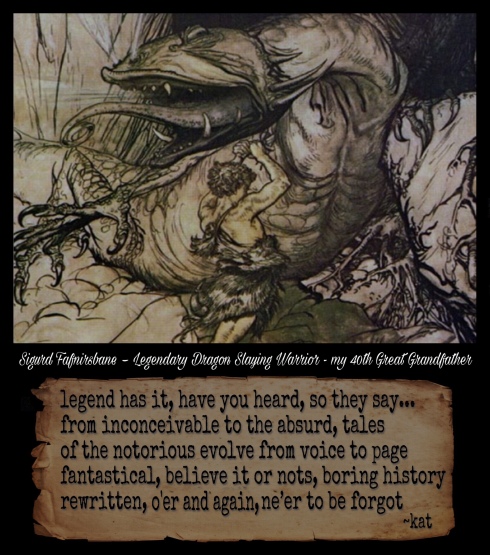 legend has it, have you heard, so they say…
from inconceivable to the absurd, tales
of the notorious evolve from voice to page
fantastical, believe it or nots, boring history
rewritten, o’er and again, ne’er to be forgot

Many a tale has been spun regarding Sigurd. Most notable and corroborated by several traditions is the story of how he killed a dragon. Truly the stuff of legend, because, of course, one must believe that dragons actually existed to give it any weight. There are love triangles, a jilted lover Brünhild who called for his murder and then asks to be burned with him on his burial pyre. Honestly, I read about it all with a grain of salt. According to history, they did manage to have a daughter, Aslaug, who married Ragnor Lodbrok, another legendary figure…and down the line the links in the chain eventually led to my grandfather, my mother and me. But Dragons? You’ll be relieved to know I haven’t found a reference to unicorns in my tree…yet! 🤣

Like Loading...
This entry was posted on Thursday, August 16th, 2018 at 8:21 pm and tagged with ancestors, Challenge, digital art, free verse, Jane Dougherty's Poetry Challenge, Poem a Day, Poetry, stanza and posted in Challenges and Writing Prompts, Digital Art & Photos, Essays, free verse, Poetry, Random Thoughts and Musings. You can follow any responses to this entry through the RSS 2.0 feed.
« Autumn – Stanza 15
Returning »