Ode to Bluebirds of Happiness 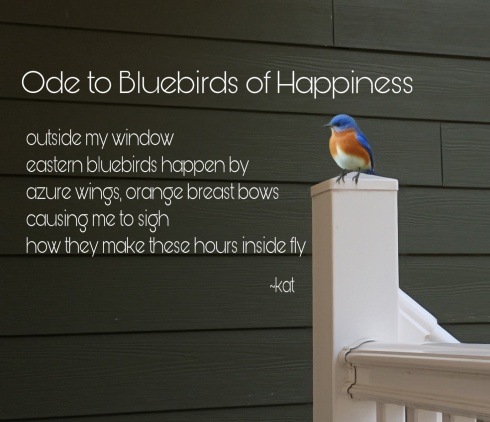 Ode to Bluebirds of Happiness

outside my window
eastern bluebirds happen by
azure wings, orange breast bows
causing me to sigh
how they make these hours inside fly

With a focus on the ordinary (as in ordinary, everyday people, places, or things) I created a new form I called the Horatiodet. See what I did there? It’s a portmanteau that combines the words Horacian+Ode+et. A Horatiodet is a total of 5 lines, syllable count: 5-7-7-5-9 / rhyme scheme: ababb. In other words, it is a short Horacian Ode (only one stanza), a form based on the style of Horace, Quintus Horatius Flaccus (December 8, 65 BC – November 27, 8 BC), the leading Roman lyric poet during the time of Augustus.