death interrupts our planned existence in an instant

Death has visited my corner of the universe thrice this week. Firstly, taking our beloved old tortoise, Flash, who succumbed to kidney failure.

Secondly, it claimed a lovely pear tree ripped asunder by a wayward moving van who edged too close, depositing her beautiful limbs across the street, blocking traffic, tearing down cable lines and shutting down power for several of my neighbors. 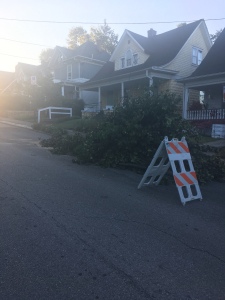 And thirdly, while the city assessed the damage done by the felled tree, a block over police stormed the home of a poor soul whose demise was the likely result of an overdose. A neighbor, fearing the worst, reported his repeated attempts to contact them to no avail. Death is a disruptive interloper leaving sorrow and destruction in its wake with no regard for our well-planned routines. It does what it will leaving us to clean up the mess. I do hope it is finished with our little neighborhood for a while. Not that I would wish its arrival to anyone else’s neighborhood. But it is a sobering reminder of how fragile life is. A reminder to live each moment to the fullest. Live long and prosper my friends.

Like Loading...
This entry was posted on Thursday, October 4th, 2018 at 9:48 am and tagged with Challenge, death, digital art, Monostitch, October, Poem a Day, Poetry and posted in Challenges and Writing Prompts, Digital Art & Photos, Essays, Monostitch, Poetry, Random Thoughts and Musings. You can follow any responses to this entry through the RSS 2.0 feed.
« October 13-31 Poem #3
October 13-31 Poem #5 »