Two stanzas today. Yesterday was spent on the road. 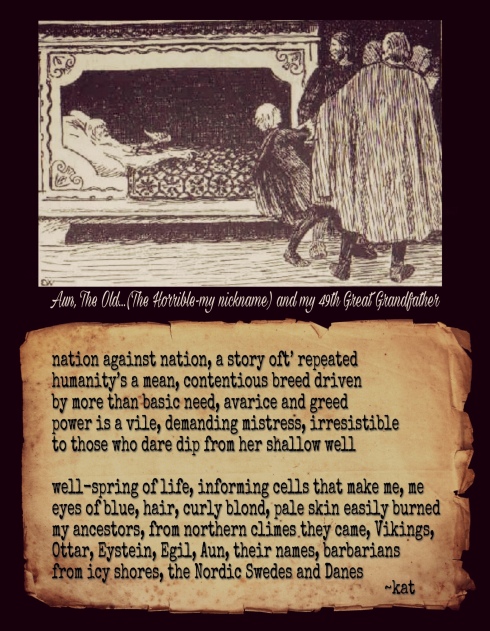 nation against nation, a story oft’ repeated
humanity’s a mean, contentious breed driven
by more than basic need, avarice and greed
power is a vile, demanding mistress, irresistible
to those who dare dip from her shallow well

From Wikipedia, a story about Aun, of the Yngling Dynasty, King of Uppsala…and allegedly, if the tree leaves on Ancestry.com are correct, my 49th Great Grandfather. Aun was a horrible man, a terrible father who was sick with power….

Ruling from his seat in Uppsala, Aun was reputedly a wise king who made sacrifices to the gods. However, he was not of a warlike disposition and preferred to live in peace. He was attacked and defeated by the Danish prince Halfdan. Aun fled to the Geats in Västergötland, where he stayed for 25 years until Halfdan died in his bed in Uppsala.

Upon Halfdan’s death Aun returned to Uppsala. Aun was now 60 years old, and in an attempt to live longer he sacrificed his son to Odin, who had promised that this would mean he would live for another 60 years. After 25 years, Aun was attacked by Halfdan‘s cousin Ale the Strong. Aun lost several battles and had to flee a second time to Västergötland. Ale the Strong ruled in Uppsala for 25 years until he was killed by Starkad the old.

After ten years he wanted to sacrifice his tenth and last son and name the province of Uppsala The Ten Lands. However, the Swedes refused to allow him to make this sacrifice and so he died. He was buried in a mound at Uppsala and succeeded by his last son Egil. From that day, dying in bed of old age was called Aun’s sickness.

Like Loading...
This entry was posted on Monday, August 27th, 2018 at 11:47 am and tagged with ancestors, Challenge, digital art, free verse, Jane Dougherty's Poetry Challenge, Poem a Day, Poetry, stanza and posted in Challenges and Writing Prompts, Digital Art & Photos, free verse, Poetry, Random Thoughts and Musings. You can follow any responses to this entry through the RSS 2.0 feed.
« an empty nester’s CHARADE – A Cleave Poem
Journey – Manic Mondays »