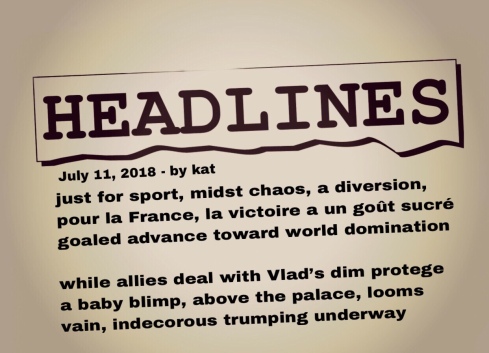 A twofer today…so much news…so little space. How could I not include France’s victory over Belgium, advancing them to the final challenge for the World Cup. Bravo!

But that is not the only world news. This is definitely not Belgium’s week…first losing the semifinal match with France and now hosting the NATO summit; having to contend with Trump’s vile, divisive bloviating. I have to say it, though I’m sure it is of little consolation to our allies…I didn’t vote for Trump…and it bears reminding that he did in fact LOSE the popular vote in 2016. Our broken system launched him into the oval despite our best attempt to thwart his rise to power. Sorry… we are (most of us) so embarrassed!

Thanks again Jane for this daily poem prompting.

Like Loading...
This entry was posted on Wednesday, July 11th, 2018 at 9:18 am and tagged with Challenge, digital art, headlines, Jane Dougherty's Poetry Challenge, Poem a Day, Poetry, Terza Rima and posted in Challenges and Writing Prompts, Digital Art & Photos, Poetry, Random Thoughts and Musings, Social Issues, Terza Rima. You can follow any responses to this entry through the RSS 2.0 feed.
« Tinged
Caged »