About the challenge: Each Tuesday I will provide a photo prompt. Your mission, if you choose to accept the challenge, is to tell a story in 280 characters or less. When you write your tale, be sure to let me know in the comments with a link to your tale. This is important as I have noticed that some of the ping backs have not been working. If you would prefer to post your tale in the comments (some people have very specific blog themes but still want to participate), I am happy to post a link to your site when I post your tale in the Round Up.

Photo by sasint at pixabay.com

Normal
“Dr. Gerard, you can finish up here.”
“Yes sir. Tell me, why would such a beautiful woman want to change how she looks?”
“She wanted to look “normal”. Told me not a day goes by that she is not ogled at or
propositioned.”
“That’s sad. Well I hope she gets what she was hoping for.”
~kat
277 Characters

By The Dark Netizen:
TRANSPLANT
Well, this wraps it up. Congrats on another succesful transplant, doc.
“Thanks! It a tough one.”
Coz you were operating on your ex wife, using an experimental method?
“Yes, my friend. You see, she always called me a dog. I want to see how she deals with possessing a dog’s heart…”
Character Count: 280

By Lisa at Tao Talk:
Still Alive
In the year 2525, humans are still alive – the same humans. In 2100, medical technology leapt by millenia with help from visitors from a planet on the other side of the sun. Bionic gene technology made us immortal. All humans have been sterilized. I just had my 400thbirthday.
[279 characters]

By Reena at ReInventions:
Viral
A semi-conscious state does wonders. Just before I lost consciousness, I heard gems uttered by the doc–
“This is the 44th surgery this month. Needless to say, it was not needed. But I’m richer by a few millions.”
They didn’t know I’m a social media marketer. The story went viral.
(278 characters)

By Jannat at Trust Yourself:
The years flew by so fast, all the hardwork pays off and the dream comes true. Here I am today as a anesthesiologist. I made it. The thought crossed Dr Jay’s mind just when the physician asked her if she’s sure about the patient’s loss of consciousness.
“Yes,”
“Scissors please?”
(280 characters)

By Tien at From the Window Seat:
Final Operation
“It’s out. Luckily he came back to us when his cancer recurs,” the surgeon announced.
Everyone in the operating theatre cheered.
“Of course, we must remain silent about leaving the surgical scissors in his stomach in the previous operation,” the surgeon cautioned.
Everyone nodded.
(278 characters)

By Fandango at This, That, and the Other:
The Operation
“Doctor, we’ve lost him,” the resident said.
“Doctor, are you going to make the call?” the intern asked.
“Doctor, you did everything you could,” the nurse said.
“It was hopeless from the outset,” the doctor said.
“That’s because the patient was a cadaver, doctor,” the resident said.
(279 characters)

By Deepa at SyncWithDeep:
Payback
she
taught me
biology
and…
I
did her
operation

By Larry at East Elmhurst A Go Go:
A Misunderstanding
After Linda left him, Sam told Ennio, who didn’t speak English well, that his heart was broken. Ennio called an ambulance. Dave was rushed to the hospital on the assumption of a heart attack. Everyone went crazy and his phone rang constantly. Ennio now studies English.
(274 characters)

By Di at Pensitivity101, two tales this week:
Take One:
Everything was going well at first, then the familiar change in body language and the theatre team knew they couldn’t escape from another rendition of Dem Bones, Dem Bones, Dem Dry Bones.
187 characters
Take Two:
The team worked frantically to get the patient’s heart beating again but to no avail.
Then the haunting lilt of ‘I ain’t got no-body’ filtered down from the theatre lights and the surgeon fainted.
195 characters

By Enzo at Travel, Good Food, Arts and More:
White Lie
Leo was told by the surgeon the operation would last only 20 minutes but this was a white lie not to raise his levels of anxiety.. In reality the complexity of the intervention was such that it required much more time to get resolved. Leo woke up 5 hours afterwards unaware of it.
(278 characters)

By Kristian at Tales from the Mind of Kristian:
Cutting Words
The Anaesthetic hadn’t worked. She was aware of lying naked while a doctor made an irreverent, downright vulgar remark about her breasts. Being bashful, this was mortifying.
Then, without any finesse, the surgeon sliced her open and she heard him say. “That’s not right at all!”
[277 Characters]

By Tessa at Tessa Can Do It:
What’s Up with the Doctors?
“Ron, did you have to pull Joey out so hard? You pulled his shoulder out of place. ”
“Linda, I had to pull him hard to get him out.”
“You should have waited for the EMT’s to get here. Or maybe the fire marshall could have got him out of there. What is taking the doctors so long?”
277 characters

By Lorraine at Lorraine’s Frilly Freudian Slip:
Lights Out
“Stop moaning. Quiet, I command you. . .”
“Geeze Louise, you’d think I’d nicked a vain, I mean vein. Snigger.”
“Ouchy! This is such fun!”
“Dry white wine, crisp salad, hot  . . . nurse.”
“I’ll make a killing on this one. . . “
The telepath slipped into anesthetically-enhanced silence.
280 characters

By Ramya at And Miles to Go Before I Sleep:
Human Trial
“Subject 23 is not responding. Should we call it?”,the resident asked.
“Yes. Clear it and bring in Subject 24.”, the doctor replied.
“Doctor, Why are we killing humans?”
“We are not killing.Everything is trial and error until we find a perfect match.We are creating Super-humans.”
Word count – 277

By Kitty at Kitty’s Verses:
Black & White
It’s only when darkness is interspersed with light, that situations attain the much needed clarity. Else, everything is shrouded in mystery. It’s much like a needle in a haystack!
Character Count :- 212 characters.

By Sadje at Keep It Alive:
The doctors were working in a somber mood as the operation was quite complicated. Dr Jones looked up at Stacy and said would you like to close up the incision. She stepped eagerly to take Jones position. Do a good job, but but don’t leave any scissors behind this time.
Character count; 270

By John at The Magic Shop:
First Cut
He awoke, staring at strangers in hospital scrubs.  “Where am I?” He groggily asked. “Just routine surgery, Mr. Shaw”. WHAT?  He had just been visiting a sick friend. Shaw cried out ” I’M NOT A PATIENT!” A surgeon whispered back, “That’s OK, I’m not really a Doctor”. Shaw blacked out, screaming.
(298 characters)

By Melanie at Sparks From a Combustible Mind:
Doctor?
He heard the voice say “Relax.  Concentrate on breathing.  10,9,8,
He wondered why the count down.
His mind numb, he found himself falling into a black pit.  He hoped he’d be able to climb out when the time came, but if not, oh well.
This was the best sleep he’d had in years.

By Willow at WillowDot21:
Eating Disorders.
Okay, so what is the count now. Seven knives, twelve spoons, six forks and half a box of tissues. Good grief is this a joke. What did you say this guy presented with!
All I can say is it’s a miracle he’s alive. Hang on what on earth have we here?I don’t believe this!It is a……
(280 Characters)

By Peter at Peter’s Pondering:
He was renowned for it, but today he had exceeded his previous best.
He counted up the left overs, and had his team check to make sure his figures were perfect.
The figure on the table was not so perfect!
There were 7 bits left over, but everything seemed to be working.
“OK close up!”
(280 characters)

By Dee at Ladies Who Lunch Reviews, Etc:
“I’m afraid I’ve removed all I can.”
“But, Doctor, it — it’s still moving!”
“I’ve seen this happen before with these parasites.  Alien Services will take her now.  If she’s strong enough, she might overcome it.  If not…”
Everyone cringed at the possibility.
263 characters

By Rob at Art by Rob Goldstein:

The Caesurian Section
The critic
wheels my poem
into surgery.
He packs the skull
with stately
stressing.
He pins a metrical
foot to its mouth.
He tapes an allusive
paradox to its groin.
My poem opens its
eyes and speaks:
Am I great yet?
196 Characters

By John at Broadsides:
“Blood pressure 130 over 80: Pulse 55 b.p.m. All vital signs normal,, but no sign of any health insurance.”
“What!, good grief, mop my brow nurse, this is serious, are you quite sure?”
“ only funeral expenses insurance”
“” Right put everything back, stitch her up, mop my brow again, and get me a gin and tonic that was quite stressful.

By Deb at Twenty Four:
When they had made the nationals Stacey had been ecstatic, but he knew they would make the internationals.
Mike frowned. perhaps it was a bit wetter than at the State Titles but as it slipped free with no annoying noise he smiled broadly
Operation Internationals here they come
(276 characters)

Thank you everyone for taking the challenge this week. You all wrote some fantastic tales. For this week this cool picture by RyanMcGuire at Pixabay.com. I am on vacation this week, so I might not get to everyone’s post right away, but I do hope you have fun with this one. There are a couple of scenarios I can think of. Can’t wait to see what you come up with. 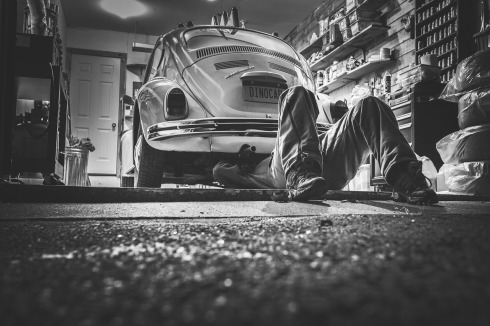 Photo by Ryan McGuire at Pixabay.com

Junior was determined to get his old VW back on the road. With all gas guzzlers banned, this old car met the maximum MPG requirements. But the AM radio/8 track player had to go. It might not have floor boards or air conditioning, but it would rock! Oh yeah!

Like Loading...
This entry was posted on Tuesday, July 2nd, 2019 at 12:05 am and tagged with 280 Characters, Flash Fiction, Photo Prompt, Twitter Tales, twittering tales and posted in Challenges and Writing Prompts, Flash Fiction, Twitter Tales. You can follow any responses to this entry through the RSS 2.0 feed.
« Be back soon…
Kimo Day 1 »