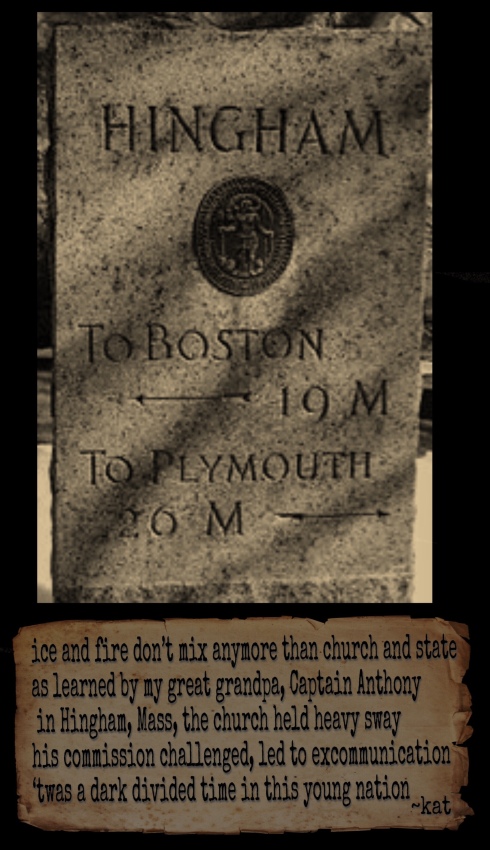 ice and fire don’t mix anymore than church and state
as learned by my great grandpa, Captain Anthony
in Hingham, Mass, the church held heavy sway
his commission challenged, led to excommunication
‘twas a dark divided time in this young nation

Below is a bit of history that included a snippet of my 12 Great Grandfather Captain Anthony Eames. He and his wife Marjory (Pierce) were among the first to settle in Hingham , Massachusetts. They had 9 children. Anthony was a sea captain, a Freeman at Hingham and Marshfield MA, a church warden at Fordington, MA, deputy to general court at Marshfield MA and Captain in the militia. Though the commission of Captain was much disputed by opposing groups in Hingham…

The town of Hingham was dubbed “Bare Cove” by the first colonizing English in 1633, but two years later was incorporated as a town under the name “Hingham”. The land on which Hingham was settled was deeded to the English by the Wampanoag sachem Wompatuck in 1655.[8] The town was within Suffolk County from its founding in 1643 until 1803; and Plymouth County from 1803 to the present. The eastern part of the town split off to become Cohasset in 1770. The town was named for Hingham, a village in the English county of Norfolk, East Anglia, whence most of the first colonists came, including Abraham Lincoln‘s ancestor Samuel Lincoln (1622–90), his first American ancestor,[9] who came to Massachusetts in 1637. A statue of President Lincoln adorns the area adjacent to downtown Hingham Square.

Hingham was born of religious dissent. Many of the original founders were forced to flee their native village in Norfolk with both their vicars, Rev. Peter Hobart and Rev. Robert Peck, when they fell foul of the strict doctrines of Anglican England. Peck was known for what the eminent Norfolk historian Rev. Francis Blomefield called his “violent schismatical spirit”. Peck lowered the chancel railing of the church, in accord with Puritan sentiment that the Anglican church of the day was too removed from its parishioners. He also antagonized ecclesiastical authorities with other forbidden practices.

The bitter trainband controversy dragged on for several years, culminating in stiff fines. Eventually a weary Eames, who was in his mid-fifties when the controversy began and who had served Hingham as first militia captain, a selectman, and Deputy in the General Court, threw in the towel and moved to nearby Marshfield where he again served as Deputy and emerged as a leading citizen, despite his brush with the Hingham powers-that-be.

Like Loading...
This entry was posted on Saturday, August 25th, 2018 at 9:23 pm and tagged with ancestors, Challenge, digital art, free verse, Jane Dougherty's Poetry Challenge, Poetry, stanza and posted in Challenges and Writing Prompts, Digital Art & Photos, free verse, Poetry, Random Thoughts and Musings. You can follow any responses to this entry through the RSS 2.0 feed.
« Autumn ~ Stanza 24
Saturday with the Muse »