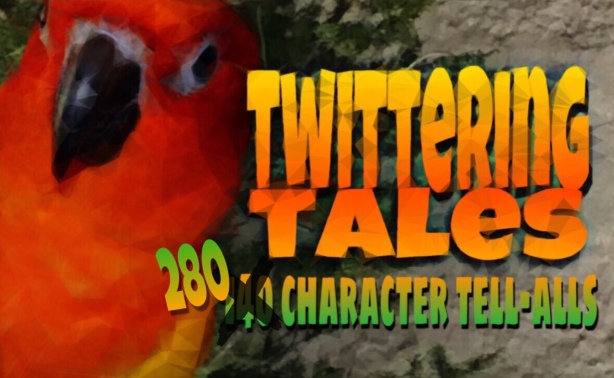 Before we head into this week’s roundup…a throwback to the previous week. This entry from Kirst at KirstWrites, #20 of her continuing twitter tale saga. There are links to the other installments from this one…Haunted Coast Part XX:

The phone’s rectangle of light burned against my eyes in the darkness. I exhaled slowly. There was nothing in the shadows. I was alone. Maybe that was the scariest thing of all.
I awoke, hours later, to warm sunshine. A dreamcatcher, not there last night, swayed at the window.
(276 characters) 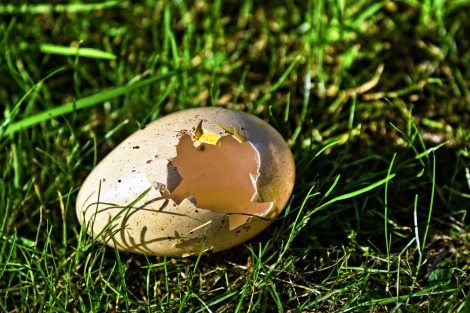 Photo by MabelAmber at Pixabay.com

From Reena at ReInventions:
4-D
Mughal miniatures, demon faces, architectural models, eggheads on pillows – he had innovated in every egg he sculpted.
“Dad, why is it lying outside in the grass?”
“This is a step beyond 3D. I await deposits from nature, before I paint a chicken head popping out of the piece.”
(275 characters)

From Michael at Morpethroad:
The hatchling had hatched but was nowhere to be found.
It looked like nature at its cruellest.
The struggle to be born and to survive.
Away on a nearby tree sat a bird looking very satisfied with itself.
I took aim, I fired, I missed, but I took the smug look off its beak.
(269 characters)

From Fandango at This, That, and the Other:
Eggshells
“You scouts police the area and pick up your trash. We don’t want any crap left behind,” the scoutmaster said.
Before leaving the campsite, he looked around and saw an eggshell in the grass. “What’s this?”
“An eggshell,” a scout said.
“I know that. Who left it?”
“The baby bird?”
(175 characters)

From Willow at WillowDot21:
“Oh! She has dropped an egg, humm! Look there is some yolk left, must have that. She is not around. Oh! Yum that was really good.”
“Ruby”, where’s that dog. “You’ve eaten that egg in the garden! Yes you did, I know you did . Who’s a bad girl Ruby, well?”
“The cat next door mum? “
(278 Characters)

From The Dark Netizen:
Egg
As it landed, the meteor created a huge shockwave, which leveled an entire town.
The military was dispatched to investigate and help in the rescue of civilians. They disappeared soon after. Their last message:
“The meteor seems like some kind of egg, and it is cracking open…
Character Count: 278

From Jan at Strange Goings On in the Shed:
Scrambled
Egg: I feel a deep sense of alienation, angry at having to answer that damn question all the time.
Analyst: How long have you felt that?
Egg: Since being in…Chicken or egg, egg or chicken? It’s like the Ouroboros, endless, eternal and unknowable. Help me!
(Breaks out of egg)
(278 characters)

From Amritha at Igniting Hope:
THE ACME
The egg-shaped shell, meant for her safety was strong, yet suffocating. She struggled and succeeded in breaking it, thus reborn – ready to rule the world with grace and élan! Life begins when you break your shell and venture beyond your comfort zone.
Character Count: 258

From Hayley at The Story Files:
Egg
The egg shell lay abandoned on the grass. I wondered if the baby bird had survived. I hoped it was and safe in a nest somewhere. The likelihood was that some animal had snatched the egg and eaten it. I walked away, never knowing the answer.

From Piyali at Piyali’s Blogs:
The Predator
The baby broke the shell and slipped out. The tiny mucus-covered body struggled a bit before wriggling towards its mother whose sleek frame was swiftly slithering in a zigzag pattern through the wet grass. Oblivious to the impending danger, a frog was resting by the poolside.
276 Characters

From Radhika at Radhika’s Reflection:
What Was It?
I was watching over the egg for many days that I found in my garden. One evening coming back from work, I saw it cracked. I looked around but found no bird. That night I heard some weird sounds coming from my backyard. Now, was it a bird or some other creature?  Sleep eluded me!
Letter count 279

From Francine at Woman Walks Dog:
Housing Expo
Welcome to this futuristic Home Solutions Expo. We think outside the box.
Here’s our latest design – The Egg-Pod. Perfectly engineered, no hard edges, strong yet light.
Unfortunately the designer had to leave suddenly, broke the door as they left!

Danger at Dawn
The sight of the broken giant egg-shell paralyzed me with fear.
I looked left & right, even behind me, but the predator had disappeared.
Sighing in relief, I moved on, when suddenly, he swooped down on me from above and grabbed me.
The early bird had caught the worm yet again.
278 characters

From Deepa at  SyncWithDeep:
A Silent Cry
a brutal act
breaking the egg
that will never see the day
abortion….
a silent cry…

From Deb at Twenty Four:
With a steady hand she pierced the shell and then used the tube to extract the contents, placing the fluid in a jar on her work bench.
Some thought her insane, but they were imbeciles … her cheesecake was phenomenal
What did it matter if she used snake’s eggs instead of chickens.
(280 characters)

From Teresa at the The Haunted Wordsmith:
What Was Inside?
“Mama, I found an egg,” Julie squealed. “What kind of bird is it?” Her mother looked at the egg and surrounding grass for hints. In the tall grass, she found the dead bird covered in ants. “Oh my,” her mother said, hugging Julie. “You found a magic fairy egg!” Julie’s eyes lit up.
279-characters

One thing I learned from your tales this week…an empty egg is a mystery. It encompasses a range of emotions, it can be a forboding omen, it can be a remnant of something innocent or something sinister. As always, everyone met the challenge brilliantly. Thank you so much for joining in last week.

This week, a pile of Tarot cards is your inspiration in this photo by AlbanyColley @ Pixabay.com. I call this challenge Pick a Card. And you can certainly do that. Pick one card and write about it. What is your chosen card telling you? Or did you pick it because you are hoping for something? On the other hand, you could tell the tale of how or why these cards came to be tossed in a pile. Maybe there is a story about the seeker or the seer that needs to be told. Whatever the tale, have fun. Craft your story in 280 characters or less. And we’ll see you at the Roundup next week. It’s in the cards! 🙂 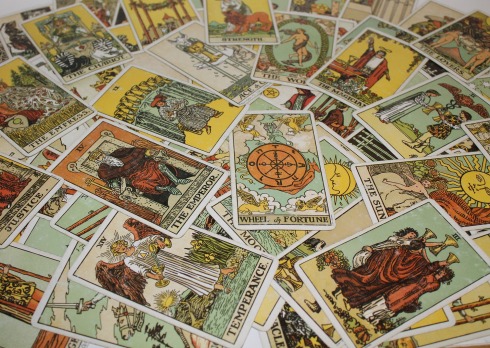 Photo by AlbanyColley at Pixabay.com

The cards never failed the seekers who came to her for the Oracle’s message. Tonight, she needed a sign. But each card she turned bore the same ominous message. Frustrated, she tossed all the cards on the table. There he was glaring at her once more. Death coming to call.

Like Loading...
This entry was posted on Tuesday, June 26th, 2018 at 12:05 am and tagged with 280 Characters, Challenge, Flash Fiction, Photo Prompt, TT, Twitter Tales, twittering tales and posted in Challenges and Writing Prompts, Essays, Flash Fiction, Random Thoughts and Musings, Twitter Tales. You can follow any responses to this entry through the RSS 2.0 feed.
« Daily Lune #25
Daily Lune #26 »