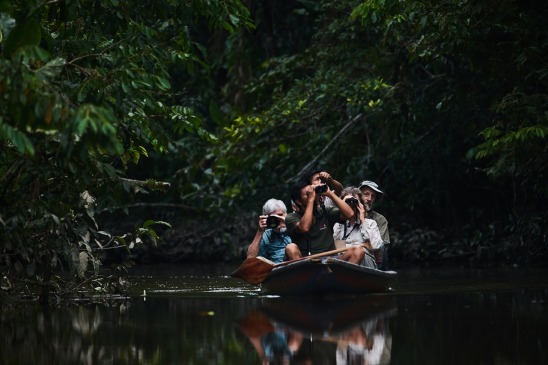 Photo by leoperezwildadventure at Pixabay.com

“Just around the bend,” Harvey told his passengers. “Ready your cameras. Don’t wanna miss ’em. These critters are fast.”
Appeasing the swampies had been a family tradition for centuries. It was a small price to pay…a few lone travelers that no one would miss, to save civilization.
(279 Characters)

From Michael at Morpethroad:
The tour group was told the river was full of amazing creatures.
Cameras were at the ready when ahead of them a giant squid rose from the murky depths.
So busy were they snapping images of the wonder before them, they failed to notice the tentacles encircling their boat.
(269 characters)

From Fandango at This, That, and the Other:
Gator River Adventure
“Keep your cameras ready, folks,” the guide said. “The gators love to put on a show.”
He noticed that two people were aiming their cameras up. “Folks, the gaters are in the water, not in the trees.”
Those were the last words heard as the pterodactyl swooped down onto the dinghy.
(277 characters)

From Radhika at RadhikasReflection:
The Prize Money
A wildlife magazine announced a challenge open to all, “A prize money of 1 million dollars for pictures of the monstrous creatures of the river”. A group of brave hearts accepted the challenge. How many made it through and collected the prize money is a wild guess!
Letter count :267

From Jannat at Jannat007:
Hellen: Oh see, there’s this family of swans.
Bob: We’re so lucky to get this view too early
Macadamian: Long neck, broad bill, webbed feet, all white plumage, and here it is.
Bob: Picture courtesy?
Macadamian: All because of my polaroid camera.
Bob: Well, I also have a share in it.
(279 characters)

From Martin at Martin Corcoran:
Millennial Park
‘And you say you cloned them from an old smart phone that was found embedded in amber? Are you mad? You’re no idea what you’ve unleashed. Oh my god they’re evolving, they’ve discovered instagram, I’m being tweeted alive. Aggggghhhhhh lol.’
239 Characters

From Reena at ReInventions:
Spirits Remember
“Same spot, same pics …. Can’t we do something different on our vacay?”
“I’ve heard that the spirits of those who die unnatural deaths hover around for ages.”
“Ohkk! You are still obsessed with your ex. How can the spirit help you now?”
“Spirits remember the tormentor.”
“Was that u?”
(280 characters)

From Deb at TwentyFour:
And here we have a photo of that endangered species known as the tourist. Never seen without their extra appendage they are known for getting lost, falling off items and talking nonsense.
The authorities suggest you approach with caution.
(237 characters)

From Joy at PoetryJoy: (a trio of tweets)
Few stopped to savour the glorious view spread out before them, or note the delightful sounds of wildlife in the dense vegetation, intent instead on clicking their cameras, thinking only of how they would share some stunning images on social media to impress their friends with.
(278 characters)

cameras poised and eyes peeled
they had no inkling of how their
canoe was sinking, letting in water
enough to pool and wet them well

they were so enchanted by the scenes
before them, and those to come, that they
ignored the feeling of soggy feet until, too
late, it became waist deep at least
(280 characters)

Bearded hipster Harry sat in the back with his face set and grim. He didn’t want to spoil their fun but he knew his situation was getting desperate. As the vessel keeled this way and that as they turned excitedly, he felt his stomach contents protesting with their every movement.
(280 characters)

From Francine at Woman Walks Dog:
Down the River
Its my dream the Real Amazon Experience. 100’s miles of wild untouched waterway. Watch out for the piranhas Shane. We’re frontiersmen – a tough fearless team. Wait til I tell them back home.
A tank ? What do you mean a tank ? Like the one they used to film Titantic’ ?

From Ron at Read 4 Fun:
Not much money taking tourists upriver. They complained about the price but got a pity discount when they agreed to a crowded boat. Lots of expensive cameras. Cameras bring lots of money. The crocs would eat well. Next croc hunter tour would find fatter specimens.
(265 characters)

From Jane at Jane Dougherty Writes:
Flash
The sudden rattle & flash from the tourist cameras disturbed the birds of paradise. They disappeared into the tree canopy in a blaze of colour. It also disturbed something else. Something that wasn’t frightened. Something that was angry. The guide took one look and jumped ship.

From Willow at WillowDot21:
The Annual Jolly
Yearly on their reunion jolly they hired a large rowboat with guide and went looking for the Zander. Last spotted in 2010 in the Teddinton area of the Thames. As usual the cunning Zander happily floated under the rowboat out of sight of their cameras. Preferring to be extinct.
(277 Characters)

From Hélène at Willow Poetry:
Sinking Boat
That’s my sister with the tour group. On her return I will be overwhelmed with photo sharing. This one picture tells its own story though. It’s an overcrowded boat with folks preoccupied with their cameras. What happens if the boat sinks, will they take underwater pictures then?
(280 characters)

From Anurag at Jagahdilmein:
Monster Alert
We stood frozen as as we saw the monsters come towards us. If they saw us, we were toast.
But almost miraculously, they passed us by unsuspectingly.
We’d escaped discovery this time, but we knew our relief was temporary, no one was safe from these tourists for too long.
271 characters

From Kirst at KirstWrites:
Holiday Fail
Holiday of a lifetime indeed! I’m stuck at the back of the boat, her shoulder in the way of every photo I take. She’s flirting with the tour guide as well.
The tour guide reported that the missing women began fighting on boat trip, and both fell into piranha-infested river.
(275 characters)

From Jan at Strange Goings On in the Shed:
They chattered excitedly. The weekend was going to be a riot, except for one person.
His hallucinations were disturbing. The intense Moon wasn’t helping.
The beast was filled with hunger, wanted flesh. Wanted it now. He was turning and no one could stop it. It was finally free!
(278 characters)

I loved last week’s photograph. There were basically two prompt views. One veered off into horror, mythical monsters as well as some real beasts of the deep. The other type of story reeled us in slowly and steadily, until it was time to reveal a twist. And some were a combination of the two. They were all great fun!

On to this week’s photo prompt. I am really enjoying the beautiful scenic photos that I have found on Pixabay. Here’s another woodland, watery scene. And a boat. If you could call it that. What’s the story here? See you next week at the roundup!

Photo by Leirdal at Pixabay.com

“It’s Roger’s skiff alright. What’s left of it. Don’t know whether to be happy or sad. Damn that Roger. Three weeks! Always getting himself into a mess that the rest of us have to bail him out of.”

Just then, there was a rustling in the brush.

Like Loading...
This entry was posted on Tuesday, April 17th, 2018 at 12:05 am and tagged with 280 Characters, Challenge, Flash Fiction, TT, Twitter Tales and posted in Challenges and Writing Prompts, Flash Fiction, Random Thoughts and Musings, Twitter Tales. You can follow any responses to this entry through the RSS 2.0 feed.
« Monday with the Muse
Fluorescent Day 17 »