About the challenge:  Each Tuesday I will provide a prompt, and your mission, if you choose to play along, is to tell a story based on that prompt in 140 characters or less.

If you accept the challenge, be sure to let me know in the comments with a link to your tale. A final note: if you need help tracking the number of characters in your story, there is a nifty online tool that will count for you at charactercountonline.com.

I will do a roundup each Tuesday, along with providing us a new prompt. 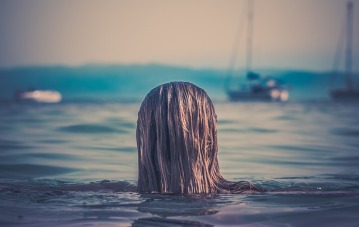 From Reena at ReInventions
Deeply disappointed is the romantic me
When my heart goes aflutter in the depth of the sea,
they kill imagination, these guys with long hair.
(140 characters)

From Kitty at Kitty’s Verses
One final dip. The pains of relocating.He was to cut it short,  what use was his mane of hair, when there was no sea to sink into?
134 characters

From Lorraine at In 25 Words More or Less
One final dip. The pains of relocating.He was to cut it short,  what use was his mane of hair, when there was no sea to sink into?
134 characters

From Jane at Jane Dougherty Writes
Shaggy-haired, the head emerged, faintly kelp green. I waited for it to turn, to see the swimmer’s face. The air chilled. That was the face.

From Di at Pensitivity101
Oh how she yearned to be aboard.
But this world was not for her.
Mermaids exist beneath the water, not above it.
110 characters

From Martin at Martin Cororan
The siren spotted the sailor on the deck of his boat.
‘Look at that rippling torso,’ she sang. ‘It’ll be weeks before I need to eat again!’
(137 characters).

From Susmitamukherjee at Uniquesus
It was hot and sultry. The cool water seemed tempting. The hippie jumped off board without a thought. “But oh! he hardly knew how to swim.”
(140 characters)

From Michael at Morpethroad
Mutiny was not tolerated.
She was made walk the plank.
Bobbing to the surface as they cheering sailed away
She noticed the shadow and fin.

From Sangbad at Thoughts of Words
Ichthyander swims up the water. He looks behind–the island, his home, at the distant; he looks forward– the ship of Pedro Surita waiting for him.
(140 Characters)

From Peter at Peter’s Ponderings
Sights lined up.
Ready.
Fire.
Torpedo away.
Enemy destroyed.
Return to base.
The wig over the viewing bubble of the mini sub was a great idea!
(140 characters)

From Irena at Books and Hot Tea
The pirate ship shrieked.
Governor’s men could taste their victory.
They were unaware that she, pirates’ secret ally, was waiting for her cue.
(140 characters)

From Kirst at Kirst Writes
Cocktails on the yacht. All afternoon his fat hands pawing at her. That damn dress clinging in the sticky heat. The water felt like freedom.
(140 characters)

and here was mine…
Lara’s husband and that tramp of his were on board. She set the bomb to go off just as the fireworks started. “Happy Independence Day Baby!”
(140 Characters)

Awesome tales everyone! I always love the diversity of your entries. Taking a break from the nautical theme this week. See what you can do with this week’s photo prompt from Pixabay.com. Oh, I’m sure this door has tales to tell! 🙂

People called us an overnight sensation. If they only knew how many dives, we played to get here. Wouldn’t a had it any other way.

Like Loading...
This entry was posted on Monday, April 10th, 2017 at 11:21 pm and tagged with 140 characters, Challenge, Photo Prompt, twittering tales and posted in Challenges and Writing Prompts, Flash Fiction, Twitter Tales. You can follow any responses to this entry through the RSS 2.0 feed.
« Concrete – Magnetic Poetry Monday
Bonkers – NaPoWriMo #10 »