Photo by qimono at Pixabay.com

From Michael at Morpethroad:
The Doors
Who’d a thought so many choices so many doors?
From bubbling lava pools to tropical forests, to dancing girls and boys, to vast sandy spaces.
The choice was ours, but we had one choice.
The loosely moraled joyously chose the dancers, the wise and stoic the sand.
No return no regrets.

From Reena at ReInventions:
Opinions
What a make-or-break choice! The door I enter could suck me into a whirlpool, or take me to the destination of my dreams. I guess the clue lies in the reflections. I don’t see harm in seeking opinions.
(202 characters)

From Radhika at Radhika’s Reflection:
The rules of the game were simple. State your single wish and you will be lead to that door.
Or open any door to explore what it holds. It could be something beyond your wildest dreams or there could be nothing at all. The choice is entirely yours!
Ted finally made up his mind!
Letter count : 279
What would you do, if you were in Ted’s place?

From Calm Kate at Aroused:
Door of Opportunity
Each door offered ‘a dream come true’ option – return to the past, propelled into the future, a space station on Mars, eternal life, visit my precious deceased father, straight to heaven, my dream beach/bush location. But once opened there was no return … now to make the choice!
280 character

From Fandango at This, That, and the Other:
Easy Money
Harold looked across the highly polished wood floor and shook his head.
“I knew it was too good to be true,” he said to himself. “Easy money, great working conditions, steady work. That’s what they said.”
He glance at the newspaper ad in his hand. It read “Doorman Wanted.”
(275 characters)

From  Martin at Martin Corcoran:
It’s Off To Worse We Go
The seven dwarves made a fortune from their pay-per-view site ‘Watch Women Sleep,’ which, while sleazy, was a marked improvement on their original business idea: ‘High Hoes.’
175 Characters

From Debbie at Twenty-Four:
Jerry paused, retirement may have been driving him crazy, but now he had to wonder if this godsend was a new form of torture.
Looking down the hallway he stifled a groan, painting the dormitory doors had seemed ideal, until he realised how many there were.
(256 characters)

From Team Wellness at World of Wellness:
The Doorway To
Many folks stood with their bag of misery, facing the doors. All were informed,that on opening the door they would either find pure bliss or someone Else’s bag of misery. They had to make a choice.
Folks simply walked away hugging their own bag of misery.
Char Count :255
Recollected from a Sufi Story read in an Osho Book. Happiness is a choice and a risk!!

From Hèléne at Willow Poetry:
Life’s Choices
Life’s Choices
Life,
with its myriad surprises
Of late,
countless blessings
Today,
panic, doubt
burn in my belly.
Facing my challenge
I creep like a mouse
choosing door #4.
Stepping over the threshold
quickly,
the door closes behind me.
The past
is no more.
Today
just is.
Tomorrow’s light
shines forth.
(275characters)

From TinTins at Swerve Strikes Back:
Each door had a small peephole into the past; each heartache encountered, each mistaken opportunity, each dream unachieved. It would have been easy to walk back through a closed door of familiarity. It took courage to step through the door wide open; the door unknown.

From The Dark Netizen a short story inspired by the photo prompt. You can read it here. It’s a good one.

From Ron at Read For Fun:
My staff will choose for me. Six doors of Death by (You’re Fired) #1 Rex, fired by Twitter. #2 Mike, fired for lying. #3 James, fired for disloyalty. #4 Anthony, fired for vulgarity. #5 Steve, fired for fashion sense. #6 Hicks, fired as hopeless. #7 I WIN the Nobel Peace Prize.
(279 characters)

From Jane at Jane Dougherty Writes:
Now What Does That Remind Me Of
He told her to wait at the end of the hallway. There was nowhere to sit, no music no TV to watch no other candidates to stare at just a row of closed doors. She frowned as a word—Gladiator—jogged a memory. An instant later the doors flew open on a yelling sword-swirling horde.
277 Characters

From Peter at Peter’s Pondering:
To make sure that he always addressed his wives correctly their names began with the first two letters of their allotted day.
Morag, Tula, Wendy, Thelma, Francine, Sandra, and Susan all eagerly awaited his visits, or so he thought!
He just wished he could remember what day it was!
(280 characters)

From Kirst at Kirst Writes:
Choose a Door
Make a choice. Any door. Your future is on the other side.
But how do I do know what’s behind them?
You don’t.
I might pick the wrong one!
There are no wrong doors. Only different challenges behind each one.
What if I fail?
Then you fail. But the real failure is not choosing a door.
(277 characters)

From Hayley at The Story Files:
Seven doors; six things that would kill me, only one that would free me. I had reached the final part in this biased life or death ‘game show’ which was a reality in my country. I choice the middle one. Grabbing the handle, I opened the door and faced my destiny.

From Willow at WillowDot21:
The Doors
Bother muttered Alice, enough already. Rabbits, Madhatters,and Walruses. How much more could her brain take?Just when she thought she was free she was presented with a multiple choice of doors. She opened the middle door.Too find a smiling Queen of Hearts with her axe raised!

From UniversalUnionist at BroadsidesDotMe:
“We have a stable”
“But look, there are plenty of rooms”
“They are reserved for important travellers”
“How do you know that I, my wife, or the baby she carries are not important?”
“You are covered in dust, you smell of sweat and donkey”
“So there are no rooms at this inn?”
“Only a stable”

From Jan at Strange Goings On in the Shed:
“Choose two doors, but be very sure of your decision.” His voice was soft.
She felt it cut her soul, quick, with no hesitation.
“One leads to immortality, the other to total annihilation, as if you never existed.” He sighed.
Memory and Forgetfulness. What a choice!
Azrael smiled.
(279 characters)

From Indhu at Always:
The Hostel
The floor was empty and all rooms were closed.
“What’s wrong! Hello” shouted Dia.
She opened her room and sat on the bed. There was blood everywhere. Dia ran to the door, when a hand from under the bed held her leg.
She screamed!
“Surprise” said Rita sprawling out of the bed.
<272 characters>

This week’s tales made me think, laugh out loud, gave me a fright and elicited fond memories of familiar stories retold. What a great roundup! Thanks to everyone who participated this week. Such a creative bunch you are!

This week, a night scene; the underbelly of a city being worked on by a duo of night shift workers. What lies below? What do the people who live nearby think of all the lights, smoke, steam, and noise? What conversations are the workers engaged in? What is happening behind the storefronts and apartment windows. So many possibilities with this photo by Fabio Santaniello Bruun at Unsplash.com. I hope you’ll simmer on it a while and tell us what you see. As always, remember the 280 character rule. I’ll see you at next week’s Roundup! 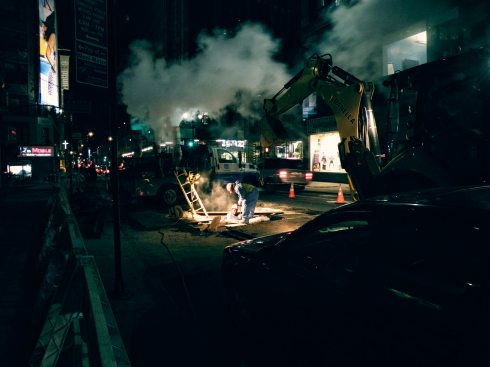 Madge got off the bus. She knew the way home on Elm St. but Elm St. was closed. The street sounds blared louder, louder.

Poor Madge was escorted safely home, but she couldn’t recall how she got there.

Like Loading...
This entry was posted on Tuesday, May 8th, 2018 at 12:05 am and tagged with 280 Characters, Challenge, Flash Fiction, Photo Prompt, TT, Twitter Tales, TwitteringTales and posted in Challenges and Writing Prompts, Flash Fiction, Random Thoughts and Musings, Twitter Tales. You can follow any responses to this entry through the RSS 2.0 feed.
« Dear John
Reaching – 42 Day 8 »