About the challenge: Each Tuesday I will provide a photo prompt. Your mission, if you choose to accept the challenge, is to tell a story based on that prompt in 140 characters or less. Be sure to let me know in the comments with a link to your tale.

I will do a roundup each Tuesday, along with providing a new prompt. Have Fun!

Photo by Nordseher at Pixabay.com

Starting us off my tale…
The twister spared the trees but had tossed the apples on the ground.
“Looks like an apple butter year,” Mae quipped. It was her best batch.
(140 Characters)

From Reena at Reinventions:
This looks rotten on one side. Not the best for apple pie for her special people.
After all, their grandchildren visited only once in a year.
(140 characters)

From Michael at Morpethroad:
There’s one bad apple and I pulled it out.
Can’t have it spoiling the whole barrel.
You could have been that apple.
Lucky I pulled you out.

From Martin at Martin Corcoran:
Newton’s ex-wife never grew tired of cooking apple pies and dropping them on him from a great height, yelling Don’t blame me, blame gravity!
(140 Characters)

From Fandango at This, That, and the Other:
The old woman with the arthritic hand thrust the apple toward me and asked if I wanted a bite. When she started to cackle, I ran away.
(134 characters)

From Irena at Books and Hot Tea:
“It’s a magic apple,” gradfather said.
“Magic isn’t real,” I gumbled.
“Just try it,” he smiled.
And magically, my sadness disappeared.
(131 characters)

From Sight11 at Journey:
Who knew that the bright red exterior was getting rotten inside? Looks can be deceiving.
Well death was eminent. If not maggots, then teeth.

From Kitty at Kitty’s Verses:
As the new turns to the experienced for guidance and support,the latter looks forward to the former’s novelty.Life comes a full circle.
134 characters.

From Peter at Peter’s Pondering:
Each year he offered the first of the crop to his darling wife.
This year she was not there to receive it.
Gone.
The apple of his eye forever!
(140 characters)

From Lorraine two tales at In 25 Words, More or Less:
Different disguise. Smaller apple.
That girl was always one sandwich short of a picnic.
(86 characters)
Or
“Steve, take a break,” Grandfather Jobs said, offering a small Macintosh apple.
“Wait . . . I think I have an idea,” and the IPhone was born.
(140 characters)

From Jan at Strange Goings On in the Head:
This is fruit from the Tree of Life  and Death. It enables you to see the creation of the Universe or its death. What do you choose to see?
(140 characters)

From Willow at Willowdot21:
“Look” he said. “It was just like this, round and ruby red” My eyes grew larger.
“It was bigger of course  and full of poison.” Winked Grandpa.

From Vivian at Smell the Coffee:
Mirror mirror, am I the prettiest one of all?
You wld be if only you’d eat the apple you were given!
Apples, not chips!
WHAT?
Just go on a diet!
140 characters

Thank you to everyone to took a bite of the apple last week. Some of you made me laugh out loud. You were clever, sentimental, mysterious and inspiring! As always, BRILLIANT! Truly! 🙂

This is Week 52, which means we’ve been tweeting these tales for a year! Another anniversary of sorts. The challenge photo for this week is this photo of a clown by GLady on Pixabay.com. I don’t particularly like clowns. They can be scary. But they make some people happy. I often wonder about the people who dress up like clowns. What is their story? What is this guy’s story?

I hope you have a good week. If you decide to join the challenge, have fun! I’ll see you at the round up. ❤ 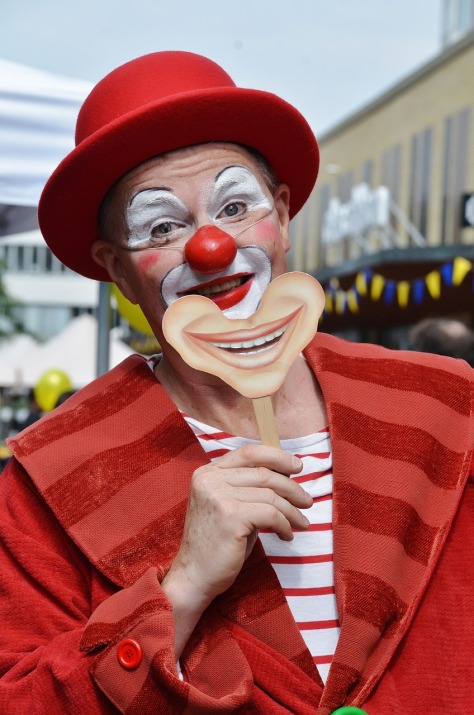 Photo by GLady on Pixabay.com

When Joe was a kid he loved the circus; especially clowns. They were the nicest guys. But Joe was not nice. It was the perfect disguise.
(137 Characters)

Like Loading...
This entry was posted on Tuesday, October 3rd, 2017 at 12:05 am and tagged with 140 characters, Challenge, Flash Fiction, Photo Prompt, Twitter Tales, twittering tales and posted in Challenges and Writing Prompts, Essays, Flash Fiction, Twitter Tales. You can follow any responses to this entry through the RSS 2.0 feed.
« Magnetic Poetry Monday – 2 October 2017
Misty Fay »