Perlocutionary -Friday’s Word of the Day 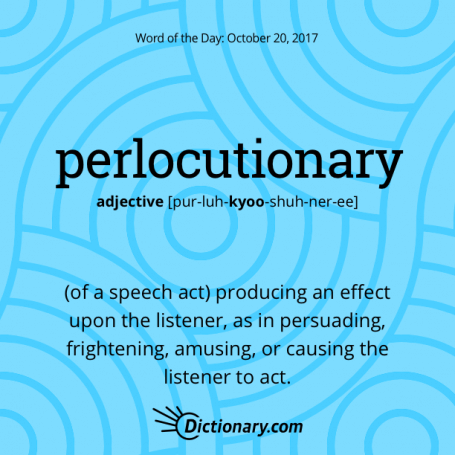 Today’s word of the day on dictionary.com is a whopper, and therefore quite the challenge when constrained by the limited syllable budget of a Haiku. I shall nevertheless give it its due. Perlocutionary is an adjective that describes a type of speech that persuades, enlightens, inspires, frightens, or amuses the listener, causing them to act. Philosopher, J.L. Austin explains it perfectly in this excerpt from “How to Do Things with Words”, written in 1962: “We can similarly distinguish the locutionary act ‘he said that’ …from the illocutionary act ‘he argued that’…and the perlocutionary act ‘he convinced me that’…”

The word perlocution has been around since the 16th century originally meaning the act of speaking. It basis was formed from the Latin locutio, “speech, speaking, discourse”, a derivative of the verb loqui, “to speak”. Its present iteration as a noun and adjective did not enter the English language until the 20th century with the addition of the prefix ‘per’ meaning “through, complete or perfect” (as in brought to completion).

I learned that there are stages in the application of locutionary, illocutionary and perlocutionary acts. While it would seem that the latter is the more refined direct act of the three I was surprised to discover that, in fact, infants between the age of 0-8 months are masters in the art of perlocutionary discourse through the use of sounds and gestures. Every whimper, coo and cry has an affect on the hearer, causing them to act. Eventually the child begins to repeat actual words (locutionary acts) and to apply them with meaning as in the words “no” or “why” (illocutionary acts).

It’s all very interesting of course. And way over my head. I have rarely bothered myself to determine whether a speech or statement is locutionary, illocutionary or perlocutionary, but I do admit to being moved and swayed by words. A simple cry for help raises my adrenaline and propels me into help mode. And a temper tantrum can shut me down in no time flat.

We are so easily convinced by words. I doubt that I’ll take time to analyze the words that move me, next time it happens. Even though I now have a word for it. Perlocutionary acts…my biggest challenge at the moment is figuring out how to fit a six syllable word into a Haiku. But at least now you have a new word to file in your vocabulary drawer under “words that are nice to know”.😊

Like Loading...
This entry was posted on Friday, October 20th, 2017 at 6:53 pm and tagged with essay, Haiku, perlocutionary, Poetry, word of the day and posted in Essays, Haiku, Poetry, Random Thoughts and Musings, Word of the Day Haiku. You can follow any responses to this entry through the RSS 2.0 feed.
« Mixed Message – A Cleave Poem
Black and White -Day 4 »

13 responses to “Perlocutionary -Friday’s Word of the Day”