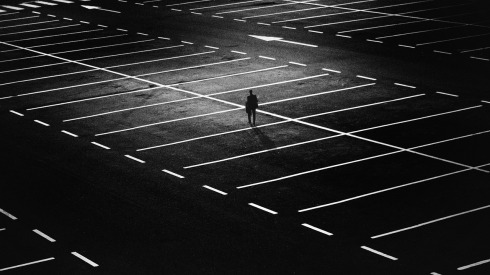 He hated working late. Worst day ever! At least it would be easy to find his car, except…
“What the hell?” His heart raced. He retraced his steps. “Shit!”
He tapped the speed dial on his phone.
“Hey, it’s me. Come get me outa this hell-hole.”
“On my way. Bad day?”
“Don’t ask!”
(278 Characters)

From Michael at Morpethroad:
He was sure he’d left the car right where he was standing.
Looking left and right he knew he was in the right place.
How could his car not be here?
He thought of the embarrassment of calling home to say it was gone.
Then he remembered level two, not level three.

From Reena at ReInventions:
At the end of a long and tiring day, he scanned phone messages, while walking in the parking lot.
“Taking a different route every day keeps your mind agile….” read a social media post.
But, not finding the car at its usual spot just numbs the mind at this hour. It was silent agony.
(280 characters)

From Martin at Martin Corcoran:
Bloke-Depot
‘Bloke Depot. How may we assist?’
‘Hello, this is Henry…my wife dropped me off with you a few hours ago whilst she did the weekly shop and hasn’t come back…yes again…because it’s getting dark, I’m scared and I don’t know where I live.’
(234 Characters)

From Kirst at Kirst Writes:
Dying Planet
When we last visited this planet, the white lines were dividers between each human’s vehicle. So many vehicles, so many people.
Where have they all gone? That one – scan him. Yes, another malnourished, signs of radiation sickness.
Take us out of orbit. There’s nothing left here.
(279 characters)

From Fandango at This, That, and the Other:
The Takeover
He’d built a successful company that employed hundreds. So when the large conglomerate made him an offer for it that sounded too good to be true, he jumped at it.
But walking through the now empty parking lot of his just shuttered company, he knew it really was too good to be true.
(280 characters)

From Jane at Jane Dougherty Writes:
Power
He had always dreamed of a city without cars. Now he walked through one empty car park after another, a faint smile on his lips, wondering what he could use his newly discovered superpower for next.

From Jan at Strange Goings On in the Shed:
The Package
It was a desolate place, she chose well. A voice like the beating of leathery wings interrupted his thoughts.
“Here’s the package. Don’t mess it up, you’ve already upset me.”
The man paled at the look in her eyes. It was his first time dealing in souls and probably the last. Fin.
(279 characters)

From Francine at Woman Walks Dog: (visit Francine’s blog to learn the story behind the story)
The Sweet Hereafter
Midnight alone here they said. Fresh tarmac like treacle, clean white lines to synch the landing with these signature shapes.Time to eat my last liquorice sweetie, sound of drones looming nearer, wafts of cinnamon. I will be beamed up to a sweet and varied life, to encounter endless Allsorts.

From Leena at Soul Connection:
The Puff of Love
Evry1 Think I Made Mistake,Thts True..MARRIAGE
Nw I C My Lyf Lyk This Deserted Street..DARK
2day I Lost My Hard Earning Wilfully To U.I Gv U Evrythng Knwng U Played Wd My Feelngs
Nw In Middle Of Ngt Leaving Evrythng Behind,Clueless Whr M Headng,Bt I Knw Wil Find Lgt In Lyf Once Agn.

From Peter at Peter’s Pondering:
Meet me after the battle he said.
Just have to dash to Bosworth Field he said.
Then ZAP!…..I find myself transported in time to this deserted car park in Leicester.
The local paper says it is 2012. I left Richard in 1485. How can that be?
And just where is my Sovereign Liege?
(277 characters)

From universalunionist at Broadsides:
The veld has changed since the days of wild elephant herds, roaring lions and packs of scavenging hyenas’ Space for the vehicles of conservationists take priory and we must rejoice at the advance of civilization.

From Willow at WillowDot21:
Why was he alone there should be a hundred souls here. The last transport was now. Everyone had left months ago leaving the final few to shut down the planet. It was dark and acid rain was falling. 9 o’clock the email said, he got his mobile out to check…. nine AM…. Noooo!
(278 Characters)

From Rules640 at Life at 17:
Coin-Sized
“How far is it Dyna?” He said while trying to keep up with his secretary’s pace, though she was walking tortoise slow.
“It’s not very far, Sir” Dyna replied.
He rolled his eyes, “Obviously it is not far for you, you are not coin sized….”
237 characters

From Anurag at Jagahdilmein:
I walked towards the parking with a spring in my step, but as I reached it, my feet suddenly felt like lead. I stood shell-shocked as I looked at the vast emptiness.
Of all the days, it HAD to happen on my wife’s birthday.
The day that I had promised to steal a Ferrari for her.
277 characters.

From Isabel at IsabelCaves:
Lost and Found
The parking lot was empty. It was full of cars just a minute ago. Andrew reached into his pocket. He pulled out a small black object. “Blackwing to base,” he said into the mouthpiece. “I’ve found the interdimensional portal.”
(225 characters)

Very nicely done everyone. I am enjoying these tales. Aliens, time travel, absent minded senior moments (well, that’s what I call them!), apocalyptic nightmares, and a few odds and ends. Thanks for joining us last week. This week going with the flow. Here’s another random situation for you to chew on. I’ll see you at next week’s round up!

Photo by leoperezwildadventure at Pixabay.com

“Just around the bend,” Harvey told his passengers. “Ready your cameras. Don’t wanna miss ’em. These critters are fast.”

Appeasing the swampies had been a family tradition for centuries. It was a small price to pay…a few lone travelers that no one would miss, to save civilization.