When the temperatures drop, I crave soup…and bread. I scanned the cupboards to see what I had on hand and found a lovely bag of black beans. I also had a few of the essentials around, so Black Bean Soup it was!

The first thing I needed to do was prepare the beans. According to the bag (1 lbs dry black beans) this meant bringing them to a boil in 4 cups of water and simmering for 10 minutes and then covering them for a one hour rest. 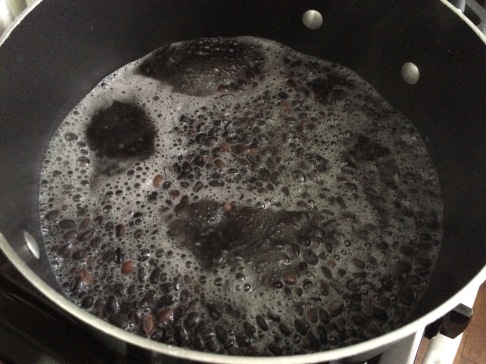 While the beans were plumping, I assembled the other ingredients. Not having a tried and true recipe on hand, I gleaned several recipes online and came up with a recipe of my own based on my preferences (as in no cilantro, as some recipes called for…I am one of those peculiar people who can’t stand the stuff!) and what I happened to have on hand. This is how I do most of my home cooking. It has helped to have this blog so I can write it down. That way I don’t have to repeat the process from scratch when I want to create a dish from scratch! 🙂

Here’s what I came up with:

“To Taste” (you’ll want to adjust the amounts based on your own preferences)
Salt
Pepper
Crushed Red Pepper (me? I like it hot! so I use about a 1/2 teaspoon of the stuff, but you may want to be a bit more conservative.)

“By the Numbers” (I saw this ingredient on several recipes. When ground, it’s aroma reminds me of chili powder (without the chilies of course) and since I’ve already added the heat a la crushed red pepper, straight cumin felt like a good add to the mix. (Hey, you’re dealing with an intuitive cook here! Preparing food is a very emotional, driven by the senses type of experience for me. I haven’t killed anyone with my cooking yet, so I’m going with it!) 🙂

So…make that, 1 teaspoon of ground cumin

And a few more essentials:
two cans of chopped tomatoes (15 oz each or so)
1 TBS of Balsamic Vinegar (This was one of those “magic” ingredients mentioned a few times, meant to make this soup amazing!)
4 cups of Vegetable Broth (I found a cool concentrate brand…so I always have some in the ‘fridge.)

Once you have added all of the above to your beans (don’t drain) in your soup pot, you’re going to want to simmer it for several hours until the beans are tender. It smells heavenly while it cooks.

I’m thinking I will serve it with a bit of sour cream or shredded cheese (need to check the ‘fridge to see what I have…) I always have one or both on hand.

And as a perfect side-kick, my favorite recipe of all time…Beer Bread. You can see that recipe HERE. 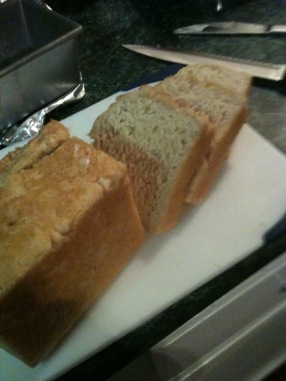 Check back a little later today. I’ll be posting the final pic, all bowled and camera-ready when it’s done! 🙂

Even though the beans were quite soft, the consistency was a bit more soupy than I like it, so I pulled out my hand blender to thicken things up a bit. And…it needed a little bit more salt. This is your chance to make your final tweaks…

I added a bit of shredded gouda…and oh my, it was-a mighty good-a! The perfect soup to warm the belly on a cold winter’s night. Enjoy! 🙂

Like Loading...
This entry was posted on Sunday, January 24th, 2016 at 4:46 pm and tagged with Black Bean Soup and posted in Random Thoughts and Musings, Stone Soup and Other Delicacies. You can follow any responses to this entry through the RSS 2.0 feed.
« Sunday’s Week in Re-Verse – 24 January 2016
On the Wing  »