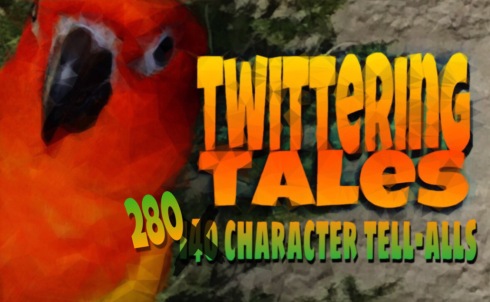 About the challenge: Each Tuesday I will provide a photo prompt. Your mission, if you choose to accept the challenge, is to tell a story in 280 characters or less. When you write your tale, be sure to let me know in the comments with a link to your tale. This is important as I have noticed that some of the ping backs have not been working. If you would prefer to post your tale in the comments (some people have very specific blog themes but still want to participate), I am happy to post a link to your site when I post your tale in the Round Up. 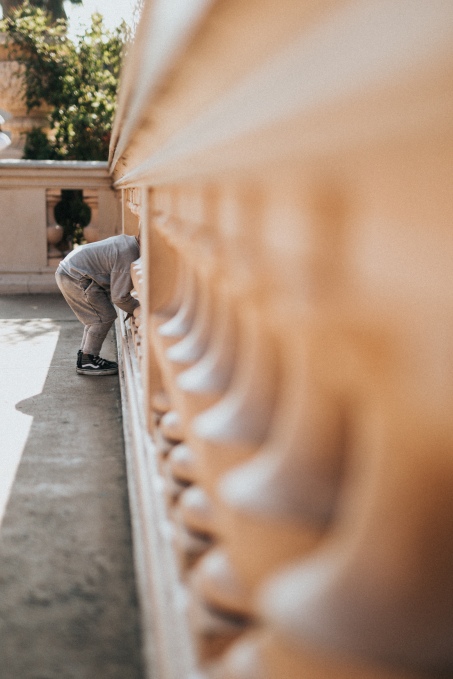 Starting us off..
The Dare
“Oh my god Ned! When I dared you to stick your head between the railings, I didn’t think you were stupid enough to actually do it! This picture is soooo going on Instagram!”
“When you’re done humiliating me, a little help maybe? I’m really stuck. Joe…come on…JOE?!!!!
~kat   (271 Characters)

By Reena at ReInventions:
Trap
“I’ve done this so often in childhood. There used to be some pretty interesting sights on the other side. I managed to find cash once.”
“Well, you’re not the same size anymore.”
“Please help.”
“I’m calling the police first. I dropped my wallet there. Curiosity kills the cat.”

By Tien at From the Window Seat:
127 Hours
“Hey kid, you’d your fun, now get your head out of the railings,” the security guard called out. “You’re scaring the tourists.”
He walked toward the boy. The crowd screamed when he pulled the boy out.
The headless body was trapped there like an executed criminal in a guillotine.
(277 characters)

By Kristian at Tales From the Mind of Kristian:
The Scent of Love
The breeze that wafted onto the balcony brought with it the scent of orange blossoms.
Jamie loved that smell, it reminded him of his Mother. Nothing could equal the comforting aroma.
Jamie put his head through the balustrade to breathe it in.
He’d never accept she’d gone.
[273 characters]

By Fandango at This, That, and the Other:
Where There’s a Will
His parents forbade him from going. Still, he always felt that where there’s a will, there’s a way.
He climbed the steps to the bridge that ran above the park. He stuck his head between the ornate concrete spindles. And he got a bird’s eye view of the city’s annual Pride Parade.
(279 characters)

By Enzo at Travel, Good Food, Arts and More:
View to the pool
David’s curiosity and lust were unstoppable, as it is the case for most teenagers who have received a repressive education. He could not refrain his attraction for what was going on around the swimming-pool below the terrace. The sensuality of these tanned bodies was untenable!
(278 characters)

By Jannat at Trust Yourself:
“Oh, hello I can see you spying on me. You better not do that. That’s really childish of you.” said Joey, a participant for a marathon, to his opponent who was observing his race routes and finishing time from the stadium’s terrace by sticking his head between the railings.
(274 characters)

By Teresa at The Haunted Wordsmith:
Do These Taste Funny?
Paul knew there was something off about the appetizers no matter what Lacie said. The only thing that kept his spirits up between heaves was knowing that she ate three times as many as he did.
192-character

By Kitty at Kitty’s Verses:
Dilemma
I thought this would be exciting, but where did I land myself in, wondered he aloud zooming in on his binoculars on the celebrity couple.He had to collect juicy tales for the gossip magazine he worked in by the end of the day, else face the wrath of the editor.
261 characters

By Willow at WillowDot21:
Timeslip.
This time travel lark is
just fine most of the
time but sometimes!
Take today I was
relaxing in a pub
with a quiet pint
minding my business.
Suddenly the edges
start to blur the
tingle starts, bang.
Here I am five years
old needing to pee
and my head’s stuck
in the blastrade.
(279 Characters)

By Larry at East Elmhurst A Go Go:
Think Twice
Linus had been told to be careful around Alice, and not to drink her tea. Now he found that he was imprisoned in a courtyard, with giant chess pieces preventing him, night and day, from escaping. ‘I mean, she’s lovely and all,’ he admitted, ‘But is she really worth the trouble?’
280 Characters

By Tina at Tina Stewart Brakebill:
TWBB* Strikes Again
Ben was patient. He could wait.
No couples or guys. Girls or little kids or moms were best. He could outrun them.
His back ached but he’d wait. For the perfect target.
SPLAT!
Shock. Fear. Relief. Then anger or laughter.
Run or bow? That space of unknown. That moment. Perfection.
280 characters
*The Water Balloon Bandit

By Di at Pensitivity101:
Stella took this picture and captioned it
‘Pawn to King Seven’.
Richard was not amused.
85 characters

By Tessa at Tessa Can Do It!:
Where’s Joey?
“Where’s Joey, Linda?”
“Ron he was next door at Larry’s. We have to get this stuff out of here.”
“Dad, help,” Joey was yelling.
“What now? We need to get out of here before the fire marshall comes by again.”
“Dad, my head is stuck.”
“We might need that fire marshall to help us out.”
278 characters

By John at The Magic Shop:
Sal’s Head
Liz thought she would give Sal another ten minutes. He had already been gone for an hour. She knew he was cheating. What better trap than letting him overhear her talk of women tanning nude under the marble bridge. Liz knew he would get his fat head stuck between the stone glancing a peek.
(299 characters)

By Ron at Read4Fun:
What Movie Did I See?
It’s disgraceful! I know we got this mansion cheaper than the going price for most in the area, but no one told me our neighbors converted their property to a Drive-In Movie. At least I don’t have to avoid admission price in the trunk of my cousin’s car like when I was fourteen.
279 characters

By Lisa at Tao Talk:
Peeping Tom
Tom was a curious boy – until he saw what he shouldn’t.
Ma told him to mind his own business, but he couldn’t resist the sounds on the other side of the fence. Just a tiny peep was all he needed.
It was the last thing he ever saw.
But every night he sees them in his dreams.
[278 characters]

By Sadje at Keep It Alive:
He always wanted to peek over the bannisters to see what was down below. What he didn’t know was that he had vertigo. He managed to pass his head through the broken plaster pillars but now fear held him captive there. It took some doing to rescue him!
Character count: 251

By Radhika at Radhika’s Reflection:
The Strategy!
With Sam’s head stuck between the pillars, the entire city thronged there to witness a grueling four hour effort, before he was finally rescued.
Smiling, the next day, he collected a cool 500 $ from his friend, winning the bet, to get his picture published in the newspapers!
LC : 279

By Deb at Twenty Four:
They exchange a pointed glance aware that synchronicity was the key. Too soon they would give the plot away, to late and he’d escape.
They waited a moment and then they ran towards him, wings flapping, necks outstretched, beaks ready to strike.
Taking the revenge of the quakers.
(278 characters)

By Peter at Peter’s Pondering:
The fortune teller told Simon that he would become a pillar of society, and his name would be emblazoned in all the newspapers. He would be famous.
Only when he saw all the photographers, with cameras poised, did he realise it was going to happen much sooner than anyone thought!
(278 characters)

By JP at JP the Wide-Eyed Wanderer:
Futility
People scurry about
short meaningless lives
in search of diversions
but finding none
never stopping to notice
the sullen sound of a rainstorm
or the flower reaching for life
from a crack in the sidewalk
they see only the futility
I see a boy with his head
stuck in a railing
and I smile
character count 276

By The Dark Netizen:
I Spy
Spying is fun.
My new neighbour is so cute. I wonder what she’s looking for on her terrace. I think I’ll fit in here, need to have a closer look. Yum. Her husband is one lucky man. Wait, isn’t that him? Why’s he tied? What! Did she just knife him?
Shit! I’m stuck and she’s seen me.
Character Count: 280

By Kelley at AuthorAnonBlog:
Evidence
“Oh shit.” Mark disappeared below the railing.
“What?” Emmy strained to see beyond the trees.
“No, it’s Mrs. Smith!” Mark leaned between the columns. “She has her tongue down the pool boys throat again.”
Emmy handed the camera up to him. “We’re here to get evidence after all.”
48 words – 276 characters

By Margo at That Little Voice:
He could be watching the Yankees battle the Dodgers through a loose board at the stadium. Or has he lifted the tent flap to spy on performing elephants when the circus came to town
The memories of youth led him to yet another hopeful peek through a hole in the wall.
(266 characters)

By Regina at Help From Heaven:
Being height-challenged, John struggled to see the clowns walking in the parade below. So he stuck his head through the balustrade spindles, to get a better look! How beautiful was all of the colors and the smiles of the clowns! He was so happy that he had not miss them.
(272 characters)

By Hayley at The Story Files:
Over the Wall
He heard music and laughter coming from the other side of the wall. Curiously, he stuck is head through the balustrades and saw his newly divorced wife having a party with her friends. She looked happier then she had been in years.

By Lorraine at Lorraine’s Frilly Freudian Slip:
Binksy*
binsky*, an American street artist, has a way with the satirical. Their latest installation, s-t-( * )-u-c-k, captures the present state of American politics and culture.
Posted on instragram, with cryptic clues as to it’s location, binksy sends all on a merry art chase through DC!
(278)
* nod, nod, wink, wink to street artist Banksy and the Banksy effect (Hop over to Lorraine’s blog to read more!)

Excellent roundup everyone! Thank you for taking on the challenge! For this week, a photo by sasint at Pixabay.com. It’s a familiar hospital scene, but the possibilities are endless. Write about the doctor (is he thinking about something else?) Or perhaps the patient is having an out of body experience. What about that. Whatever the story keep it under 280 characters. I’ll see you at the roundup!

Photo by sasint at pixabay.com

“Dr. Gerard, you can finish up here.”

“Yes sir. Tell me, why would such a beautiful woman want to change how she looks?”

“She wanted to look “normal”. Told me not a day goes by that she is not ogled at or propositioned.”

“That’s sad. Well I hope she gets what she was hoping for.”

Like Loading...
This entry was posted on Tuesday, June 25th, 2019 at 12:05 am and tagged with 280 Characters, Challenge, Flash Fiction, Photo Prompt, Twitter Tales, twittering tales and posted in Challenges and Writing Prompts, Flash Fiction, Random Thoughts and Musings, Twitter Tales. You can follow any responses to this entry through the RSS 2.0 feed.
« unbearable – Monday with the Muse
Sevenling (whirlwinds) – 25 June 2019 »