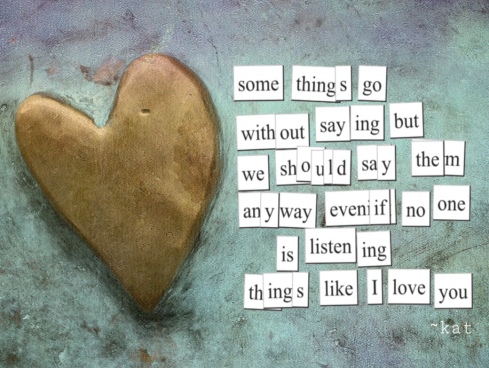 It’s so very convenient to “not go there”, especially for the milk spillers, who would rather not be reminded of the souring pool of curdling mess that they’ve wrought by their carelessness. I’m talking religion and politics of course. Oh…you didn’t know? I’m quite good at hiding behind symbolism, metaphors, and allegories. I sometimes speak in code, or not at all, simply blinking, curling a lip or rolling my eyes.

Mostly I stayed silent, happy to be invited to the party. I followed the rules. Talked about the weather and … the weather, but they knew. They always knew I wasn’t one of them. They tolerated me because, well, because I was their mother.

And then they helped to elect a monster. A monster who has ushered in a vile reign of greed, bigotry, misogyny and hate. We live in a world now, where anything goes, where there is no truth because everything is fake. “Don’t believe what you think you see, believe only me,” he spews, and they lap up his drivel like honey. They’ve closed ranks, put up a wall, drawn a line in the sand and think nothing of challenging anyone who dares question why or how they could support such a monster. They think nothing of shunning those who can’t stomach the madness, just get along, stop talking politics ever, even when they’re not around, unfriending, disowning, even their own mother…

Sorry for the rant. If you read me, you know you can expect messy, raw honesty. It’s been two years since I’ve been invited to share Thanksgiving with all my children, and consequently, my grandchildren. Two years since my oldest and second born have spoken to me. Two years of missed birthdays, missed graduations, missed milestones. My youngest two still speak to me, as long as I follow the rules. As long as I don’t mention the spilt milk souring in the corner. As long as I behave, I am allowed to see them. We talk recipes and the weather, global warming aside. I know better than to go there. I know better.

We just celebrated the first of a string of holidays here in the US. Thanksgiving was this past Thursday. Soon comes Christmas and New Years…then the birthdays roll ‘round, Mother’s Day, graduations, summer holidays. Two years ago was the last holiday they tolerated me. Last year they didn’t. And this year, I expect nothing.

I love the rain. It’s raining today. A perfect day to bake a cake, to write poetry, to forgive myself my faults, and to be at peace, having let go of expectations. When I do that, even the smallest thing is a gift. This week of being thankful finds me thankful still. Yes, I am thankful.

don’t expect too much
lay them down, down
this mid-autumn night
things like, ‘I love you’
I’m not listening. La, la, la!!!
I made a wish one rainy day
haunted by time’s tocking tick
to know, in a moment’s glance,
in the star dappled void of night
she glows ever bright
turning bare branches dark
to disagree won’t do when truth’s at stake

Like Loading...
This entry was posted on Sunday, November 25th, 2018 at 7:46 am and tagged with digital art., essay, Poetry, ReVerse, Shi Sai, week in Reverse, Week in Review and posted in Challenges and Writing Prompts, Digital Art & Photos, Essays, Poetry, Random Thoughts and Musings, Reverse Poem, Shi Sai, Week in Review. You can follow any responses to this entry through the RSS 2.0 feed.
« Keeping the Peace
November Naani #25 »