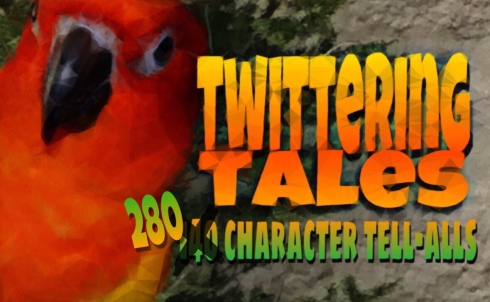 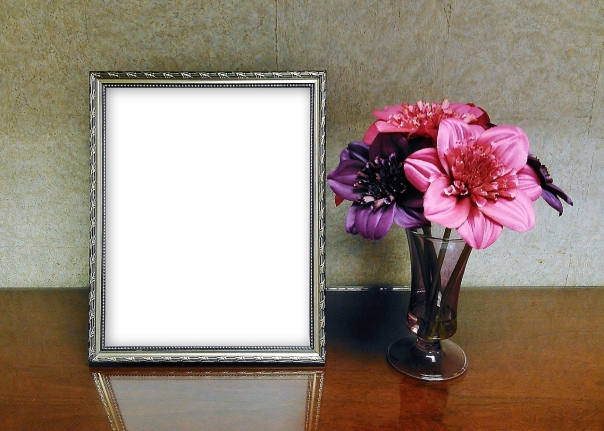 Photo by Glamazon at Pixabay.com

Broken Memories
“Isn’t my Charlie handsome?” Granny swooned. “We met at the USO you know. He was a sergeant and I had volunteered to serve coffee and donuts.”
“What is she talking about,” Stu asked his mom, “there’s no picture there.”
“Shhh. Mind your manners Stu. Don’t be rude.”
“But…”
“Hush…”
~kat
279 Characters

By Reena at ReInventions:
Extinct
One by one, the awards and certificates lose significance. Values move on to a different level.
I am in search of that one new thing which can be framed to define my life. But then, I realize I need a hi-tech kaleidoscope of moving images. Photo frames are now a thing of the past.
(280 characters)

By The Dark Netizen:
Don’t Peek
It has existed for many years.
Every subsequent generation is told about the mirror. How it is to remain undisturbed and untouched, no peeking. But, every generation has one inquisitive one. My little had brother removed the white sheet and peeked into it.
He is still inside….
Character Count: 278

By Michael at Morpethroad:
Gran placed fresh flowers every day beside the last image she had of Grandad.
She said he loved flowers, she felt an obligation to honour him in that way.
We puzzled over what she saw.
Grandad had been dead years, they never got on we thought.
He had his ways she’d say when we asked.
(280 Characters)

By Kristian at Tales from the Mind of Kristian:
She always kept flowers by the frame to remind her of the person who’d meant more to her than anyone, someone she’d lost years ago.
Placing the fresh flowers in the vase, her reflection caught in the mirror frame.
Then, putting on her façade, she went out into the world.
[271 Characters]

By Fandango at This, That, and the Other:
Hell Hath No Fury
“What happened to the picture of you and Dad in that silver frame on the side table?” Ann asked her mother.
“Sweetie, I found out that your dad’s been cheating on me, so I threw out the photo and when that bastard comes home from work I’m gonna smash his head in with the frame.”
(278 characters)

By Jane at Jane Dougherty Writes:
So many have gone, so many faces. She could paper a wall with their photos. She places flowers by a single picture frame, leaves it empty. Her memory provides the images.

By The Haunted Wordsmith:
Showcase Home
Everything was showcase ready. Everything perfect and pristine. After working hard for thirty years to afford the perfect home and high-end objects; her dream became reality. Few saw what was missing. She did. How couldn’t she? An empty picture frame matched her empty heart.
276-characters

By Di at Pensitivity 101:
‘You will always have flowers. Just take a picture and put it in this frame. Next day they will be real.’
And they were, just as Merlin promised.
144 characters

By Hayley at The Story Files:
Frame
I saw the small photo frame in a charity shop and decided it would do to put in the wedding gift box. I was determined not to spend the small fortune my sister was demanding people did on presents. I had my own wedding to save up for as well.

By Willow at WillowDot21:
“What, d’you mean he’s removed all photos from earth.” God was in no mood for riddles. Gabriel had that pained look that Michael and St Peter had grown to fear.
Satan, knee deep in photos giggling happily. “All I asked Azriel to do was to put me in the picture.”Gabriel screamed.
(278 Characters)

By Peter at Peter’s Pondering:
Away with the fairies
Mary placed fresh flowers by the picture frame every Friday, the day that her 4 year old son had jumped into the picture.
He’d always insisted that the fairies talked to him, and said he could join them. She’d played along, and said how lovely it would be.
She regretted that now!
(280 characters)

By Hélène at Willow Poetry:
Every morning was the same ritual.
Kiss an empty frame, offer flowers and a prayer.
I asked her who she idolized.
“Me!” she said.
“See my reflection, there?
I don’t see my crippled body in that reflection, only my face.
Normally all I see is my disability and can’t see Me.”
(278 characters)

By Schaap Schrifjt (Sheep Writes) at mijn hoofd is vol, letters dansen op papier (My Head is Full, Letters are Dancing on Paper):
Beauty
No matter how much make-up I’ll wear
or how skinny I am;
the mirror will not picture me beautiful.
I’m the only one who can.

By Ramya at And Miles to Go Before I Sleep:
The Mirror
Previously, mirrors were the mode of communication.
Holding the mirror in hand, one would talk with loved and dear ones.
Now, it’s just an empty frame.
Magic become Science.
The mirror is now being used in smartphones for video calls..
Character Count – 232

By Schweta at My Random Ramblings:
Void
On their first wedding anniversary, they got a beautiful, silver photo frame.
Years later, he still can’t bring himself to get rid of it.. the only physical reminder of her.
The flowers beside it never wilted, unlike his marriage
The frame remained empty, much like his broken heart.
(280 characters)

By Kirst at Kirst Writes:
Empty Frame
You can’t see it?
What? A man in white on a snowy day?
You can laugh, but I see it watching me. And I hear it, whispering late at night. It won’t let me move the frame.
I smirk after her as she leaves the room. Daft old bat, my Gran. Wait – was that a whisper?
(280 characters. Boom.)

By Deb at Twenty Four:
She had placed a lot of trust in her daughter to look after the shop while she was on leave and it appeared the other had risen to the occasion, Julie decided as she turned a corner only to pause aghast. A frame without a picture, perhaps her faith had been misplaced after all.
(272 characters)

By The Indie She:
She stared at the empty frame, a replica of void in her life.
Her loved ones whom she had given her all had robbed her of all hues. She was a blank canvas awaiting a splash of colours.
But she swathed herself in pink and purple blossoms that lent her hope and new shades of life.
(277 characters)

By Trollekar:
He bought the frame
For that one dame
Who would be his only soulmate
But no woman he met
Was so perfect
So he let them all go away
Now the frame lies empty
And he lives in self pity
For the love that he never found
Still not realizing
He could still find it
If he just took a look around
(276 characters)

Another great round! We have several newcomers! Welcome. I hope you’ll join us again. I post everyone’s tale here so everyone can read them all in one place. It never ceases to amaze me how many twists and turns one photograph can inspire. But there are links to everyone’s sites. Be sure to check each other’s blogs out. That’s the best part about challenges. Meeting new bloggers. Being inspired!

This week, I’m challenging you with a photo of a couple of sheep by KleineKiwi at Pixabay.com. Maybe they were the last thing you saw before taking a deep dive into REM and a nightmare! Or maybe the protagonist in your story is lost midst a flock of these fellows. Or…these two have a thing or two to say. What would a sheep say if a sheep could speak? I hope you have fun this week. I’ll see you at the Round-up. Happy Tweeting!

In an Alternative Universe…
How Insulting!
What’s insulting?
Isn’t it enough that they count us one by one to help them sleep? We’re not boring. Am I boring?
Not even.
They sheer us for our wool.
Some of them eat us!
Right! But now they’re comparing ‘trumpsters’ to us. I’m mean really!
What’s the world coming to?

Like Loading...
This entry was posted on Tuesday, November 13th, 2018 at 12:05 am and tagged with 140 characters, 280 Characters, Challenge, Flash Fiction, Photo Prompt, TT, Twitter Tales, twittering tales and posted in Challenges and Writing Prompts, Flash Fiction, Random Thoughts and Musings, Twitter Tales. You can follow any responses to this entry through the RSS 2.0 feed.
« November Naani #12
November Naani #13 »