About the challenge:  Each Tuesday I will provide a prompt, and your mission, if you choose to play along, is to tell a story based on that prompt in 140 characters or less.

If you accept the challenge, be sure to let me know in the comments with a link to your tale. A final note: if you need help tracking the number of characters in your story, there is a nifty online tool that will count for you at charactercountonline.com.

I will do a roundup each Tuesday, along with providing us a new prompt.

From Reena at ReInventions:

Do you fear that followers will catch up, or will you give them an opportunity? The acceleration speed shows the Leadership Quotient.
(133 characters)

From Lost In Translation 79:

Thunderous roar of the pavement below,
Throttle on full with no fear,
Grinding of teeth with baggage In tow,
The objects in mirror disappear…
(138 Characters)

From Kitty at Kitty’s Verses:
It’s always prudent not to be lost in the past, but it doesn’t do any harm to take a step back and view the broader perspective.
(129 Characters)

From Willow at Willowdot21:

The view with the wing mirror is a time annominally. The past is following us, the future approaches yet we are here now. Where are we really.
(140 Characters)

From Lorraine at In 25 Words More or Less:

From Michael at Morpethroad:

Reflective perspective
Makes for a fascinating discovery
Is it coming at you?
Will it collide with you?
A flash and it’s gone
You breathe again.
(140 characters)

From Gayl at Gayl S Wright:

No Turning Back
No turning back now
We said our goodbyes and left
Never to return
Oh, how they pleaded
The danger will be too great
Our minds were made up
(133 characters)

A Sad Departure
The lights of the town faded as we pulled farther away.
The fire had destroyed everything. With tears in our eyes we drove into the unknown.
(140 characters)

A New Adventure
Everyone cheered and wished us well. Leaving the city
behind us, we headed out for the adventure of a lifetime! What secrets would we find?
(139 characters)

After driving 24-hours straight, Tim’s paranoia would not stop. The barren desert flew by his windshield, but when he looked in the mirror…

From Francine at Woman Walks Max:

He’s behind us, he’s catching up.
Dad said “You marry that boy over my dead body”.
Didn’t believe him. Go faster, gotta get to the church
before Dad.
(146 Characters)

From Peter at Peter’s Ponderings:

On reflection I knew the twins were safer now than they’d ever been. Their father too! I wound down the window and tossed the 3 empty cases.
(140 characters)

I want to break free, On the long and winding road, looking back in anger at the fading lights.
(95 Characters)

From Kirst at Kirst Writes:

By sunset I’d reached the border. The traffic thinned as the road climbed towards the mountains. On the other side, a new life was waiting.
(139 characters)

Seatbelt on, clutch, mirror, indicate, off we go. Turn right, got to emphasise that I’m looking at my side mirror, then indicate. All good!
(139 Characters)

From Sangbad at Thoughts of Words:

Adieu
As I passed the town to settle elsewhere I looked back despondently in the rear view mirror. “If it weren’t for this darn job”, I sighed.
(138 characters)

Maniacal was that terrible thing in that one still moment. But now that it’s passed I release a cautious sigh.

I found so many of this week’s tales on the “reflective” side. 😉 Hee hee! Another great round of diverse ideas and thoughts. Some of you definitely had me thinking and guessing and cruising! Thanks to everyone who came along for the ride last week. On to the next photo challenge. What’s happening here? Who is this woman? Who is the artist? Just a simple transaction…or something more? Send me a tweet and have fun! 🙂 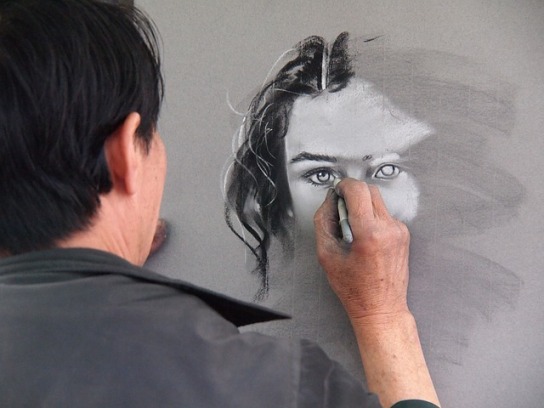 He never forgot her face. They met at the cafe. Only once. He spent the rest of his life drawing the woman he might have known.
(130 Characters)

Like Loading...
This entry was posted on Monday, April 24th, 2017 at 10:51 pm and tagged with 140 characters, Flash Fiction, Photo Prompt, twittering tales and posted in Challenges and Writing Prompts, Flash Fiction, Random Thoughts and Musings, Twitter Tales. You can follow any responses to this entry through the RSS 2.0 feed.
« Marginalia Mania – NaPoWriMo 2017 #24
Secret Place – NaPoWriMo 2017 #25 »